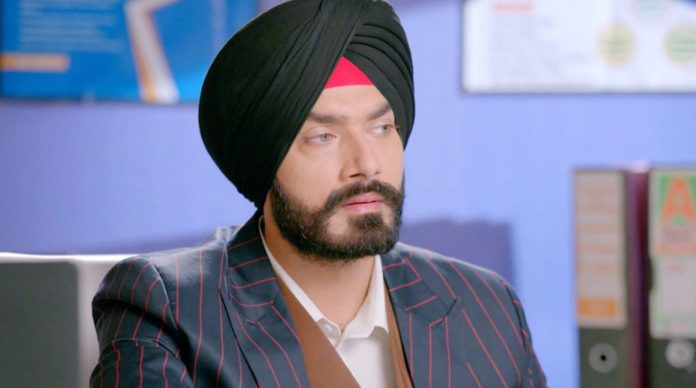 Colors Latest Choti Sardaarni Exclusive on Voot Sarabjeet calls Meher and proposes a special lunch date. Meher tells him that there can’t meet, they have to stay home and stay safe. She gets confused when he insists her. He asks her not to worry so much and listen to him. She asks him why is he inviting him for lunch. She doesn’t want him to go out of the house.

She tells that she will also not go out of her house. He tells her that he didn’t ask her to leave from the house. He asks her not to jump on to conclusions and just think calmly. He tells that they will have a lunch date by going out in their balconies, and staying connected on the video call. They both prepare special dishes for each other. She tells him that she has prepared all his favorite dishes. He likes to see her instead the dishes.

She asks him to show his food offerings. He shows his culinary skills in the special dishes. He cracks jokes and makes her smile. He asks her to just share few things with him. He asks her to feed the food to him. They act kiddish while having the food bites through the video call. She jokes that Harleen is behind him and laughs. He asks her to try the dishes he has prepared. She fails to taste it in reality, but sings praises. He asks her if she is missing Param.

Sarabjeet and Meher like the beautiful drawing. Sarabjeet tells her that he is also waiting for Param’s younger brother to come, his little son, Meher and Manav’s coming child. He gets emotional. Meher too understands Sarabjeet’s feeling. Param tells them that he will play a lot with the baby. He shares his numerous plans.

He has a big task, that’s to decide the name of the baby. Sarabjeet and Meher ask him to decide the name, but after having lunch. Sarabjeet thanks Meher for calling him as a dear person. He tells that Param is more excited than him for the baby. She tells that his idea is the best to spend time with family. He is grateful to her for expressing her feelings. He thinks how to confess his feelings, that he misses her.