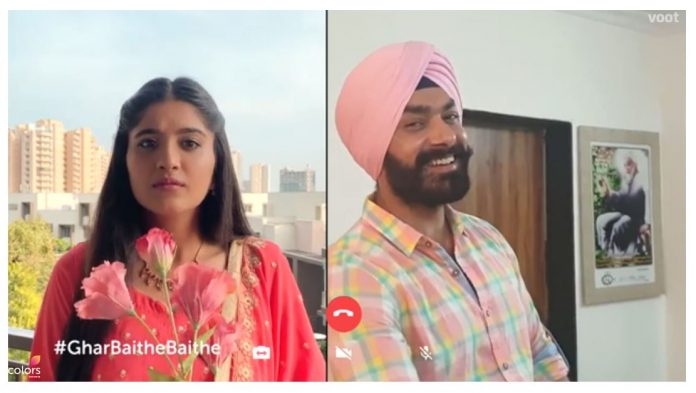 Meher tells Sarabjeet that she is taking all the necessary measures of self-hygiene. He tells her that Param has some good idea for them. Param tells that they will play Antakshari. Meher doesn’t get any good song. Sarabjeet tells her that there are no rules set for her, she can sing anything she wants. Param sings a sweet song. He tells that his mom and dad love each other, and ask them to say if its right. Sarabjeet gets his chance to sing. He sings to entertain them.

He expresses his love for Meher. Meher’s turn comes. Meher still thinks of the song. Sarabjeet asks her to start with Me too for his love confession. Meher asks him what is he murmuring like me too. Sarabjeet tells that he isn’t chanting any mantra. She finally gets a chance to tell him that love happens gradually, he needs to keep patience.

Sarabjeet’s romantic songs make her uncomfortable. Meher tells that she loves Param, her song was for Param. Sarabjeet continues to sing. He then gives the chance to Meher. They enjoy the singing parade.

Sarabjeet wants his turn again and again so that he can express love to Meher. He gets interrupted by Dolly’s call. He gets Dolly on the video conference call. He tells that he was playing Antakshari with family. Dolly likes to know that Meher is also playing with them. Meher tells Dolly that it was Param’s idea. Sarabjeet asks Dolly to join them too.

Param tells that it will be a good idea. Dolly tells that she will call Robby and Kulwant also, to get them on the call. Kulwant prays for the world’s safety. She asks her children not to go out of the house, and maintain social distance. She explains the need to sanitize the hands. She gets happy to get Dolly’s call. She enquires if everything is fine. Dolly tells that she is having a good pass-time.

Kulwant doesn’t miss a chance to taunt her. Dolly tells Kulwant that she is following all the rules and staying home. She challenges Kulwant for the Antakshari competition. Kulwant tells that there is no competition between both the families. Kulwant gets her sons online.

She gets the first turn to sing. Robby sings from Sarabjeet’s team. Meher and Sarabjeet’s romance gets interrupted by the family. Sarabjeet feels frustrated to get everyone on the video conference. He gets stuck on the same song. Meher feels sleepy to hear the same song again and again. Kulwant requests Sarabjeet to sing cheerful songs. Meher laughs on the situation. Kulwant teaches romantic songs to Sarabjeet.

Dolly asks Kulwant to see her age and sing a proper song. Kulwant and Dolly’s banter goes on. Sarabjeet tells that his turn has come and now he won’t play the game if anyone stops him. Sarabjeet finally showers his love on Meher. He regards her a blessing in his life. Everyone is thankful to Sarabjeet for giving them a chance to be positive and connected.

Reviewed Rating for this particular episode Voot airing Choti Sardarni Antakshari special episode: 5/5
This rating is solely based on the opinion of the writer. You may post your take on the show in the comment section below.