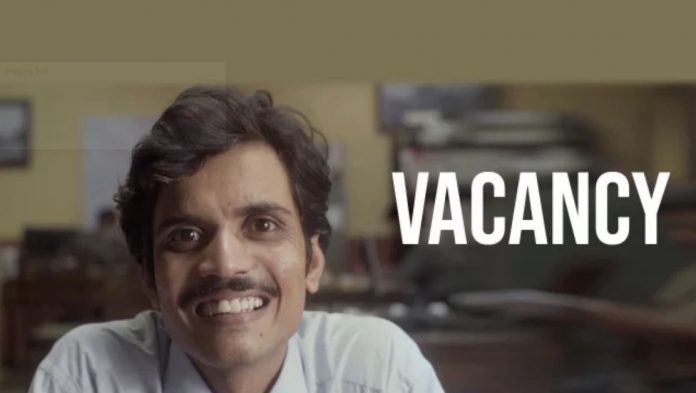 Hotstar Originals Vacancy Short comic relief for aspirants A young aspirant, Durgesh Kumar prepares for his job interview. He waits for his turn to come. He introduces himself. He shows his great academics. He tells that his extra-curricular activities are more better. He tells about his clear funda that he won’t compromise with his health.

He is questioned about the special quality, that makes him stand apart from the crowd. He thinks he can survive in the crowd competition. He tells that he can separate himself from the crowd and stand out. He explains that the crowd has no scope for individual thinking, but he can think for himself well. He impresses the interviewer by telling about his daringness to take the risks. He shares his experiences. The interviewer asks him the reason that he thinks he will get the job, when more qualified people are waiting in the queue to apply for the same job.

Durgesh is confident that he is better than others and more deserving. He tells that he has to secure his seat, he will never leave his seat. Durgesh is asked to answer some questions. He honestly answers the questions. He gets hired after passing the interview. He gets overjoyed that his preparation worked. The twist occurs, bringing a comical highlight that Durgesh wasn’t interviewing for a job, but to get a second class seat pass for six months in the Mumbai local train. Durgesh feels like an achiever, more happy to travel in the local, occupying his vacant seat. His interview turns out to be really one-of-a-kind.

Reviewed Rating for this particular episode Hotstar Originals Vacancy: 4/5
This rating is solely based on the opinion of the writer. You may post your take on the show in the comment section below.