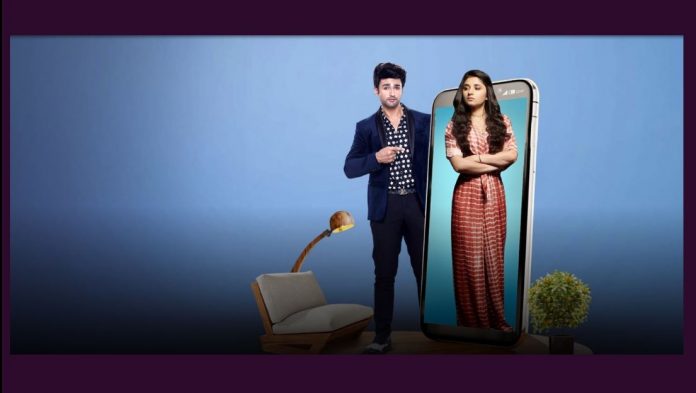 Zee Guddan First Ghar Se Episode Lockdown Special Guddan AJ Lockdown virtual date episode. Guddan wakes up from a sweet dream and boasts of herself. She calls up Akshat for a talk. She finds him repairing the bathroom shower tap. He tells her that he won’t be able to get it fixed by anyone else in the lockdown phase.

She tells him about the good dream, which made her feel normal like before. She is hopeful that everything will get normal, since its an early morning dream. Guddan tells him that she doesn’t want anything negative in her life. She turns upset that he isn’t with her. She is stuck at her aunt’s house. He misses her. He feels that she could have helped him in the household work. She shares about her loss of sleep.

He asks the reason for it. She compliments his looks. She flirts with him. He teases her by his smartness. She asks him not to annoy her further. He tells her that he has learnt many new things in the lockdown. He asks her to learn baking a cake. She tells that she has got all the ingredients and is ready to bake it. He tells her that he will guide her with the steps. Akshat instructs her and makes her complete the baking process. Guddan wishes that Akshat was with her. He wants her to be smiling.

She is sad since the cake reminds her of their first meeting, which wasn’t so pleasant. They get nostalgic. Akshat tells her that they will be meeting soon. She tells him that she got habitual to him that she finds it hard to live without him. He asks her to not miss him so much. He admits that he is also madly missing her. He promises her that he will gift her a peaceful night. She asks him if he is going to pick her from her aunt’s house. He fixes their date online.

She gets excited. Akshat and Guddan’s naughty romance goes high on the video call. She tries his same tricks on him. He tells her that he wants to dance with her, while maintaining the social distance. They both feel their presence altogether and dance on their virtual date, remembering their good times together. She wants to know if distance is good in between lovers. He tells her that love is important, she is his wife and he will obviously pamper her. He wants her to feel special. She feels happy.

He tells her that she will always be of him, even if she stays away. He asks her to not say thanks, and say something romantic to return his favor. Guddan tells him that she loves him and its obvious. He wants her to still confess it. She tells him that she will reason out why she loves him. He also wants to know the list of his good qualities. Guddan sings his praises. She loves him from the bottom of her heart. Akshat and Guddan profess love and make their moment special. Akshat likes her quality of being sweet, innocent, sensible and strong at the same time. Akshat puts her to sleep by his sweet words. He fulfills his promise. He wants her to express love as per his wish.