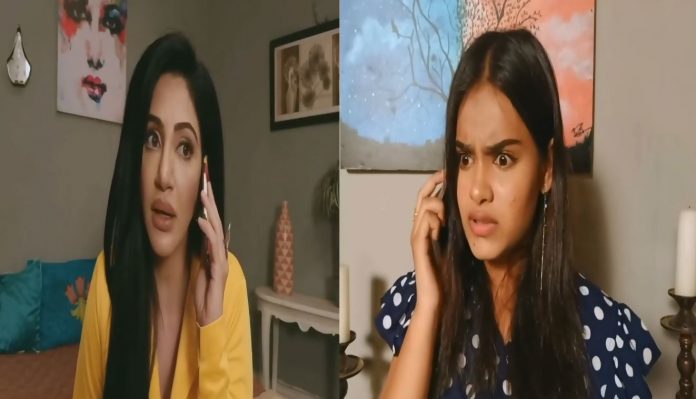 Kumkum Bhagya 6th July 2020 Maya suicide move invites trouble Maya gets troubled by Ranbir and Prachi’s relationship. She doesn’t care for his past, but his present. She wants to marry Ranbir. She doesn’t want him to have an affair with Prachi. She wants him to forget Prachi. Rhea gets sinking in alcohol. Her friend asks her to move on and live her life, just like before. She encourages her to cherish her family and feel blessed.

She doesn’t want Rhea to spoil her life for Ranbir. Ranbir and Prachi try to decide their clothes. They get confused. He calls up Prachi and asks for her help. He tells her that he wants her to decide his clothes. She makes fun of him. He doesn’t feel bad. He likes when she smiles. He tells her that he feels happy to talk to her. He praises her. He asks her why didn’t she convince Maya that they are in love, so that Maya breaks up with him.

Prachi asks him to think of any idea. He tells her that Maya is around, he will pretend their affair once again and make Maya hate him. He tells his plan to make Maya jealous. Prachi understands his plan. He confesses his love to Prachi. He tells her that she is really beautiful, a moment spent with her seems like a lifetime to him, he wants to spend his life with her, he will always love her. He asks Prachi not to stress about Maya.

Maya overhears Ranbir’s love confession for Prachi. She gets angry at him. Ranbir finds Maya really jealous and thinks his plan is really working. After Ranbir disconnects the call, Prachi gets thinking about him. She feels love for him. Meera gets Ranbir and Maya’s engagement card for Aaliya. Aaliya gets upset since Ranbir is Rhea’s love. She thinks it was a bad plan to get Maya in Ranbir’s life. She wants Rhea home. She wants Rhea’s happiness. She feels there are two villains in Rhea’s life, Maya and Prachi.

She regrets that she didn’t control the things before. She calls up Rhea, who doesn’t answer. She feels Prachi is the one to get blamed, since Prachi is the root cause of all the problems. She decides to tackle Maya first and then Prachi. Maya gets frustrated thinking Ranbir has called up Prachi to the hotel room for a meeting. She doesn’t want to lose Ranbir. She makes a plan to trap Ranbir. She wants to compel him for marrying her. Ranbir thinks he has really flown in his emotions and confessed love.

Prachi thinks if Ranbir was just acting or saying the words from his heart. She wants to know if he really feels for her. Ranbir calls up Aryan and updates him about his silly plans. He tells about his plan backfiring at him always. Aryan knows that Ranbir can never confess love to Prachi. Ranbir tells that he has confessed love to Prachi, while acting to make Maya jealous. Aryan wants to know the entire story. Prachi doesn’t know how to share such things with Pragya. She calls up Shahana to share about Ranbir’s confession.

She asks Shahana to promise that she will not reveal it to anyone. Ranbir tells Aryan that he didn’t feel such for anyone before. Aryan blesses Ranbir that Prachi soon realizes Ranbir’s love. He is sure that Prachi will accept Ranbir’s feelings. Ranbir gets glad to hear this. Shahana asks Prachi to accept that she also loves Ranbir. She tells that its clearly evident that Ranbir loves Prachi. She wants Prachi to be true to herself. Prachi tells her that Ranbir confessed love normally, it wasn’t something unusual.

Shahana pulls her leg and wants to explain Prachi that its really love. Aaliya wants to teach a lesson to Maya for double crossing Rhea. She loves Rhea so much that she is ready to do anything for her sake. She can’t let Maya hurt Rhea. She thinks to play a game with Maya and trap her. Maya goes to spy on Ranbir. Prachi pretends to be in love with Ranbir and gets cursed by Maya. She tells Maya that Ranbir will never marry her. Maya gets stressed. Aaliya calls up Maya to discuss about the wedding. Maya doesn’t want to entertain her.

Aaliya reminds that she has brought her in Ranbir and Rhea’s lives. She asks Maya why did she get in between them. Maya tells her that Ranbir and Prachi are having an affair, despite the fact that Ranbir is engaged to her (Maya). She shares her sorrow and frustration. She tells Aaliya that Ranbir and Prachi are having a fun time in a hotel room. Aaliya feels Maya is emotionally weak and its right time to use her against Prachi. She wants to separate Maya from Ranbir. She acts friendly and advises Maya to win Ranbir again. She instigates Maya. She tells Maya that Ranbir would be marrying Prachi if she backs off from the marriage.

She scares Maya about the humiliating consequences. She asks Maya to kill Prachi or herself, since she won’t be able to live like this by losing to Prachi. She asks her to better die with self respect than living with humiliation. She asks Maya to either kill the enemy or kill herself, than seeing her love dying. Meera overhears Aaliya’s deadly advice to Maya and gets a huge shock. Maya gets instigated and decides to commit suicide.

Reviewed Rating for this particular episode Kumkum Bhagya 6th July: 5/5 for Ranbir’s sweet love confession
This rating is solely based on the opinion of the writer. You may post your take on the show in the comment section below.