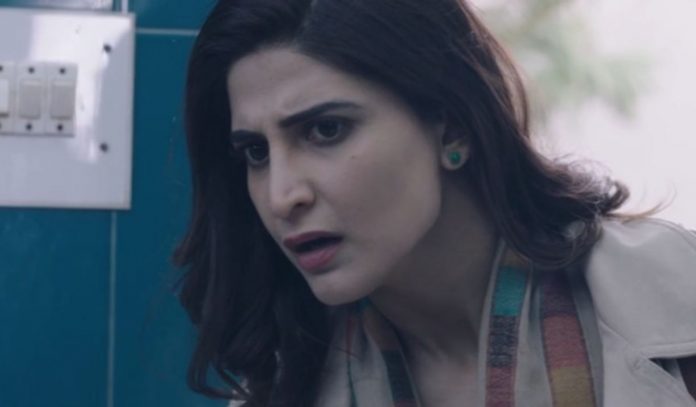 Voot Marzi Episode 3 Lies, lies and more lies Anurag sneaks into Sameera’s house. Sameera receives a shock when he attacks her. Sameera hallucinates his presence. She thinks to go home, but Isha doesn’t let her go. Sameera decides it. She wants to leave soon. Sameera reaches her house. The memories of the night get back on her mind. Anurag meets Dinesh, who was a school principal.

Dinesh tells him that Sameera used to teach in the same school, he recommended her by praising her work. He tells her that her mum passed away and he just consoled her, she defamed him for the misbehaving act, though he was innocent. He tells that she ruined his long earned respect. He adds that he had won the case against her, and proved her wrong. He tells Anurag that he didn’t step back at that time and even now, he will expose Sameera’s lie. He is ready to help Anurag. Anurag thanks him.

Sameera’s student Myra takes some pills from someone. Sameera finds some students troubling Ayaan. Ayaan accuses her for ruining his dad’s life. She offers help. He tells her that he is facing everyone’s hatred because of her. She feels bad. Anurag takes Dinesh with him to the police station. Dinesh testifies against Sameera. He tells about the past, when Sameera took the case back. He tells them that Sameera was in depression.

Inspector asks him to leave. Dinesh tells that a woman’s lie is mighty than a man’s truth. The officers think that Dinesh is just bringing out his frustration. They try to know about Barkha’s past with Anurag. Sameera gets the messages from unknown person again. She realizes its Dinesh. She calls Nitin and tells him that her earring is missing, maybe it fell at Anurag’s house. She tells him about Dinesh’s messages.

Nitin asks her to forget it. Isha’s husband gets to hear women gossip. He realizes that Isha might be cheating him, that she is showering gifts on him. Dinesh speaks to Sameera. He tells her that Anurag is also trapped by her, but he will not spare her. Sameera finds her student Myra unwell. She rushes to help her. She finds her bleeding and wants to take her to the clinic. Myra lies to her. She then confesses that she has taken abortion pills. Sameera is shocked to know it. Myra doesn’t want her family to know about it.

Sameera helps her. Dinesh tells Anurag that Sameera’s character isn’t good. He tells Anurag that he didn’t intend to tease Sameera, but she had come to him on her own. Anurag realizes that Dinesh had really misbehaved with Sameera. He finds Dinesh a wrong man. Sameera learns that Ayaan is responsible for Myra’s pregnancy. Myra wants to call Ayaan. She asks Sameera to help her by bringing Ayaan to the hospital. She sends Sameera to Anurag’s house. Sub-Inspector Rashmi wants to help Sameera. She learns that the case has been shut. She informs Sameera that the seniors studied the case and shut it since the case was weak.

Sameera knows that Dinesh is responsible for it. She regrets that her past has hurt her. She reaches Anurag’s house to meet Ayaan and inform about Myra’s abortion. She tells him that Myra needs him, she is at the hospital. Ayaan agrees to go with her. Sameera enters the house by an excuse. She tries to find her lost earring. Nitin asks Rashmi if she could find something about Anurag. Rashmi tells that she didn’t find anything and the case is shut now.

Nitin regrets that Sameera isn’t able to get justice. Isha’s husband tries to find out if his doubt is true. He spies on her. Nitin meets Anurag and tells him that Sameera is his friend. He warns Anurag. Anurag tells him that he knows about Isha and his affair. He threatens to inform Sameera about it. Ayaan meets Myra and consoles her. Myra requests Sameera to lie to her dad. Sameera tells him that she can’t lie, since a lie doesn’t help. Nitin calls Isha and tells her that Anurag knows about their affair.

She is much worried. Nitin tells her that he has met Anurag to give him a warning, but Anurag threatened him. He asks her to stay safe, Anurag wants to end everything by revealing their affair to Sameera. She gets to recall the night once again. She meets Anurag and reveals about Ayaan and Myra’s relation. She asks him to lie to Myra’s dad. He asks her if she is helping Myra or Ayaan. He asks why is she concerned for his son. She wants to help her students. He tells that lie is always a lie, whatever the reason.

She doesn’t want him to fool her. They get into an argument. Isha’s husband Shaan finds out about her affair. He tells her that he had no courage to face the truth, whatever she tells him will be truth for him. He asks her if she likes someone. She lies to him. She tells him that she loves him. Sameera and Anurag meet Myra’s father Vikas and lie to her. Vikas tells Myra that she could have called him. Rashmi informs Anurag that the case got shut. He gets relieved that everything is over. She tells that the seniors found the case weak, he is free as of now. Anurag feels happy like he will get his lost respect back.

He thanks Rashmi for bringing the good news. He asks her why isn’t she happy. He asks her if she is married. She asks if he will propose her. Rashmi still tags him a rapist, even if his crime isn’t proved. She wants him to remember that a woman’s no means a no. Rashmi meets Sameera. She tells Sameera that Anurag is still free, if he is involved in Barkha’s death, then he isn’t a right man. She tells that she is helpless because of the system. She asks Sameera to take charge and find evidences against Anurag, since she is free to do anything. Ayaan thanks Anurag for helping Myra.

Anurag tells him that police has dropped all the charges in Sameera’s case. He asks Ayaan if he isn’t happy. Ayaan tells that people won’t forget the charges on him. Anurag promises to fix up things. Isha asks Sameera to stay away from Anurag. Sameera tells her that she met Anurag, who believes that he didn’t do any crime. Isha asks if he revealed anything else. Sameera tells that he believes that one shouldn’t lie, since a lie can’t be justified. Anurag wants to file a defamation case on Sameera.

She recollects how he had spiked Sameera’s drink. He tells the lawyer Nidhi that he made his name in 15 years and Sameera ruined everything so soon. He wants Sameera to cry now. Sameera gets her earring back in her house. She realizes that Anurag visited her house. He doesn’t want anything to end so soon. He shows his wicked side.

Reviewed Rating for this particular episode Voot Marzi Episode 3 Lies, lies and more lies: 4/5
This rating is solely based on the opinion of the writer. You may post your take on the show in the comment section below.