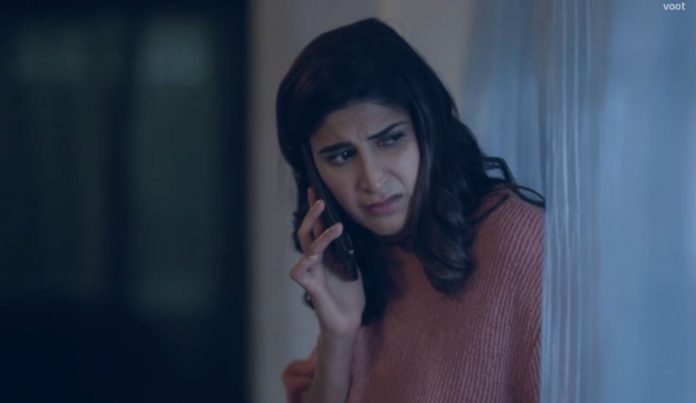 Marzi Episode 4 The doctor of deceit Anurag truth reveals Anurag finds his son suffering in the school. He tells Anurag that he hates Sameera, who is responsible for this. He asks Anurag not to meet her and just focus on something else. Anurag tries to make his relation better with Ayaan. Sameera takes the matter into her own hands and wants to dig into Anurag’s past. Anurag lays his eyes on Rashmi. He checks her profile and gets interested in her.

Rashmi gets the transfer papers. Inspector Subodh asks the reason for the transfer. She tells him that she met Anurag, she is tired of fighting with the system. He asks her if she is scared of Anurag. She tells that she wants to be answerable to her children. He asks her to answer Sameera too. He doesn’t want her to go. Sameera flies to Mumbai. She reaches Anurag’s in-laws house to know about his past with Barkha. She meets Barkha’s mother.

Sameera tells her that Anurag had raped her. Barkha’s mum doesn’t believe her. She wants Sameera to leave right away. Sameera fails to convince her. Rashmi speaks to her husband on a video call. Anurag reaches her house. She feels like someone is spying on her. She shuts the window and continues her chat. Anurag makes a leave. Sameera meets Falak, Barkha’s friend. She wants to know why did Barkha commit suicide. Falak tells her that Barkha was her best friend, she was in depression, but she couldn’t figure it out.

She regrets that she couldn’t help her friend. Sameera finds her behavior strange. She asks Falak to contact her if she remembers anything about Barkha. Sameera meets a guy Kabir at the restaurant. He tells her that his flight got cancelled and he is much frustrated. He realizes that his anger won’t help him. He makes her feel positive. Sameera makes a leave. She suppresses her sorrow and anxiety. Anurag meets his seniors and informs that Sameera’s case got over and he is free now. He tells that he has been shifting his focus on something else. He recalls entering Rashmi’s house to get information about her.

He joins the hospital again. He lies that he finds peace in helping others. He tries to earn a good name. Sameera gets Falak’s call and goes to meet her. Falak tells her about Anurag and her affair. She feels guilty. She tells Sameera that Barkha wasn’t in the city, she invited Anurag for dinner, but she couldn’t remember anything later. Sameera realizes that he had spiked her drink too. She tells him that Anurag used to complain a lot about Barkha and called her inefficient. Sameera tells her that Barkha’s mum feels Anurag is perfect.

Falak tells that Ayaan is living with Anurag. She adds that Barkha knew about her mistake. Sameera asks her to believe it that she wasn’t wrong. She asks Falak to help her in getting Anurag punished. She wants Falak to give her statement to the police and help her. Falak agrees to her. Nitin gets suspended from his job. Sameera goes back to the hotel to pick her bags. She gets flowers from Kabir. She meets him and returns the flowers. He apologizes to her for spoiling her mood. He wants to know the reason for her refusal.

She doesn’t think she should give him any reason. He feels she has been wronged, but not everyone is the same. Isha learns that Nitin has been suspended. He tells her that he has lost his job since he was helping her. He tells that he loves her. She doesn’t want to lie to Shaan. She asks him to leave. He tells that they shall tell Shaan about their affair. Isha doesn’t want him to reveal it. He tells that he is losing everything alone. Shaan comes home and finds Isha with Nitin. Isha doesn’t want Shaan and Tia to know anything. Shaan senses that something is wrong. Nitin lies to Shaan that he came to update Isha about Sameera’s case.

Falak tells Sameera that she won’t be able to accompany her. She asks Falak not to step back. She realizes that Barkha’s mum Shashi visited her and brainwashed her. Falak doesn’t want Shashi to lose Ayaan. She apologizes to Sameera. Subodh drops Rashmi home. She consumes the milk bottle, unaware that Anurag has added drugs in it. She feels tired and takes some rest. She falls asleep. Anurag reaches her house. Subodh finds Rashmi’s medicines in the car. He goes back to her house to give the medicines. Anurag enters Rashmi’s house by the duplicate keys. He finds her asleep. He finds Subodh at the door and hides.

Subodh knocks the door. He finds odd when she doesn’t answer. He looks inside the door and finds her sleeping. He makes a leave. Anurag gets mad after Rashmi and takes advantage of her unconsciousness. Sameera meets Kabir at the airport and asks if he is following her. Kabir gets into a talk with her. He befriends her with his simplicity. She tells him that he met her at a wrong time. He doesn’t want her to give any explanation. She tells him that she is in deep trouble, she got big time cheated by a person whom she trusted.

She shares her pain with him. She feels lost while searching for herself. She tells that she has changed a lot. Kabir tells her that she should move on in life and be positive. He tells that he wanted to help her, but he has to make a leave. She thanks him. She finds him a nice guy. He goes to board his flight. Sameera returns to her city. She reaches home and checks some mails. She gets a shocking news. She rushes to Anurag’s house for a confrontation. She asks him how could he send the legal notice to file a defamation case on her. He tells her that she had ruined his image and also spoiled his relation with his son.

She asks him to accept his crime. He tells that he will take revenge on her. He wants her to apologize to him publicly. He asks her to end the matter. She tells him that he can’t do anything. He asks her to stop shouting. She reveals that she knows his past, the reason behind Barkha’s past, Barkha knew that he had raped Falak and couldn’t live with him. Anurag threatens her and sends her away. She feels he is mentally sick. Rashmi gains consciousness. She suspects that something wrong had happened with her. Sameera meets Nitin and asks about the evidences against Anurag. She tells that she is much sure of her plans. She doesn’t want him to get involved. He tells her that he had bought the drugs for her sake and is much involved in her plans.

Reviewed Rating for this particular episode Marzi Episode 4 The doctor of deceit Anurag truth reveals: 4/5
This rating is solely based on the opinion of the writer. You may post your take on the show in the comment section below.