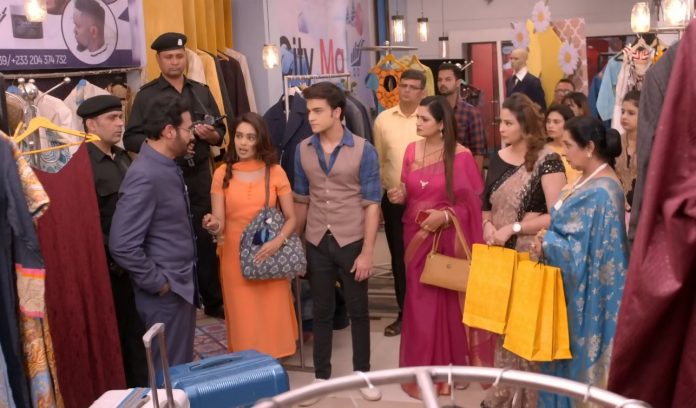 Kumkum Bhagya Shocker Kohlis threatened 22nd July 2020 Prachi wants Aryan to follow Rahul and know about his relationship status. She tells him that she can’t go anywhere, he has to go and find out the love story. Maya gets glad to meet Rahul. He tells her that he has come for shopping. He tells that he has come to meet her actually. He asks her for a coffee date. Maya likes to spend time with him. She forgets Ranbir for a while. She ignores her dad’s calls.

He asks her to answer the call, he can wait. He tells that even he is getting phone calls. Prachi asks Dida and Pallavi what happened to them. Dida tells her that they have missed someone from becoming her Bahu. Prachi asks if she is telling about Maya. Pallavi can’t tell her that they are talking about her. Dida tells that they were buying shagun saree for that girl. Prachi doesn’t understand anything. Ranbir has cleared their misunderstanding.

Dida tells Prachi that its actually her matter, Ranbir was lying about their love to Maya and they thought its true. Dida adds that they were so happy for them and wanted them to marry soon. Pallavi apologizes to them. Ranbir tells Prachi that they have made the plan together, he didn’t know that Pallavi and Dida will hear about it. Prachi asks him to see the couple and say their equations. Ranbir likes their equations and think they are in love. He gets to see Prachi and himself in the mirror. He praises themselves. She wants to ask him about Maya and Rahul. She tells him that even the girl loves the guy equally.

He gets hopeful thinking she is talking about them. He tells that the guy loves the girl a lot. He wants her to accept his love. He feels happy. She clears his mind by showing him Maya and Rahul. He realizes that she was talking about them. She asks him what did he think. He doesn’t say anything. She says Maya loves Rahul and even he loves her. He doesn’t think so. Ranbir tells her that he understood it, since she explains so well. She tells that Rahul is Maya’s first love, she couldn’t forget him, she still loves him.

Ranbir tells that Maya just told him that she moved on and forgot her past. Prachi tells that first love is such that it never gets off the heart. Ranbir asks her if she is saying as if she is also in love. Prachi tells that few things get known on own. She asks him to focus on Maya. She tells that Maya loves Rahul and they should unite them, so that they can free from her. He doesn’t think so. She tells that she will prove it. She asks him to listen to him, they will test Maya’s love for Rahul. Chobey meets them. Dida tells him that they are done with the shopping. She asks Chobey to pay the bill, since he is hurrying for the functions.

Chobey tells that he won’t pay the bills for the entire family, he just gave the offer for Ranbir. Dida asks him to just pay the bills, else they will leave. Chobey asks him if she asking for the dowry, being the groom’s family. They don’t want Chobey to frame them again. He tells that asking the girl’s family for dowry is a crime. Dida tells that she didn’t ask for dowry. Chobey threatens to file a FIR against them. He tells his wife that Kohlis are asking him to pay the bill. Dida denies to ask him any help. Chobey lectures them about the bad dowry customs.

He tells that he wants to end the bad customs from the society, he wants to serve the society by making a good custom. He wants marriage to be clean bond between families and two persons, not a business deal. He shouts on them that he is against the dowry. He tells that if they ask for dowry, then he will exclude them from the society. The people in the mall get happy hearing him and praise him for initiating a good step against dowry.

Chobey tells that he will really file the FIR. Dida and Pallavi ask him not to trouble them. He threatens to send them to jail. Prachi defends Kohlis. She tells him that they didn’t talk about dowry. Chobey asks her to stay away from their matter. Prachi asks him will he trouble his own relatives. Maya stops Prachi from shouting on her dad. Chobey gets glad that his daughter is on his side.

Reviewed Rating for this particular episode Kumkum Bhagya Shocker Kohlis threatened 22nd July 2020: 4/5
This rating is solely based on the opinion of the writer. You may post your take on the show in the comment section below.