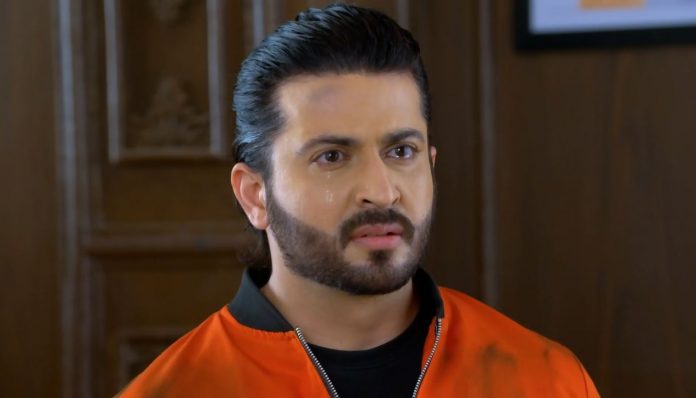 Kundali Bhagya Upcoming 23rd July Karan’s shocker Rana declares that Preeta had hired him to kidnap Rishabh. Shrishti asks them not to believe him, he is mad, he is lying. Rana tells them that its the truth, Preeta had hired him, even her mum is involved. Shrishti tells them that they have no money to hide a goon. Rakhi asks Rana what is he saying and why, Preeta can never do this. She slaps Rana for framing Preeta. She asks him not to take Preeta’s name again. She knows he is lying.

She tells that Preeta and Sarla are decent people, they can never plan to hurt someone. She shows her faith on Preeta and Sarla. Rishabh tells that Rana got paid to tell Preeta’s name in front of them. He tells that she had risked her life to save him. He asks Rana to think of someone else’s name instead Preeta if he wants to save himself. Rana doesn’t change his statement. Rakhi asks the inspector not to believe Rana, he is lying against Preeta. Inspector arrests Rana. Mahira tells them that Preeta is really involved.

She knows Mahira is a terrible person, Karan is a nice guy and deserves a better girl than her. Karan shuts up Preeta angrily. His reacting gets shocking. He supports Mahira. He tells Preeta that Mahira is the best girl for him. Mahira gets too happy when Karan supports her. He tells Preeta that he will marry Mahira even if the mahurat has passed. He believes Mahira. He doesn’t think Preeta matters to them. Preeta cries when he insults her. Mahira wants to prepare for her marriage. Rishabh feels sorry for Preeta.

He apologizes to her on Karan’s behalf. He also thanks her for saving his life. Preeta asks him not to apologize. Sherlyn feels that he can’t differentiate between right and wrong. Rishabh agrees with Sherlyn, since he didn’t know her truth either. Kareena blames Preeta for making a problem for Luthras. Kareena tells Mahira that Karan and her marriage will happen tomorrow. She wants to make sure that no unwanted people come home to disturb them. Rishabh and Rakhi get silent when Kareena degrades Aroras. Kareena wants to support her Bahus.

Preeta thanks Rakhi for understanding her. She asks Rakhi not to support her or fight with the family. She doesn’t want Luthras to get against Rishabh and Rakhi. Rakhi sympathizes with her. She tells that they are still together, Karan is crazy and doesn’t think before thinking, he is clean-hearted. She regrets that the misunderstandings have made Aroras and Luthras away. She knows that Preeta is their well-wisher. She asks Preeta to have hope, everything will be fine. Preeta asks Rishabh not to thank her, he is her good friend and always supported her.

Rishabh feels lucky that she is his friend. Preeta thanks Sameer and Shrishti for coming to help her. Preeta and Shrishti return home. They don’t want to tell anything to Sarla. Janki asks them to hide from Sarla until her anger calms down. Sarla confronts them for their trip to Luthras. She demands the answers. She tells that she knew that Preeta will go to meet Karan and went to Luthra mansion, she met Sherlyn and got to know that Preeta isn’t there. She asks if Karan didn’t get married to Mahira. She asks her where did they go, what is going on.

Shrishti doesn’t want to tell her. Sarla asks her not to lie. Preeta tells her the truth, that she saw Rishabh getting kidnapped and she went after him to save his life. She reveals that even Karan and she got kidnapped. She tells that she saved Rishabh, Rakhi thanked her. Sarla is glad to know this. Sarla asks what did others say, did they thank her or doubt on her. She knows that all the Luthras aren’t like Rakhi, they would have insulted her and hurt her feelings.

Reviewed Rating for this particular episode Kundali Bhagya Upcoming 23rd July Karan’s shocker: 4/5
This rating is solely based on the opinion of the writer. You may post your take on the show in the comment section below.