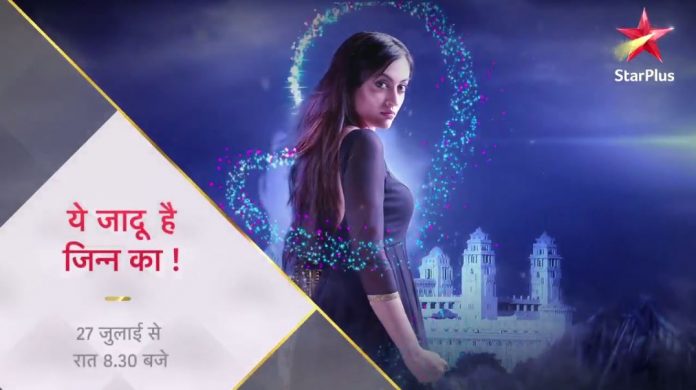 Yeh Jadu 27th July New Episode Aman Roshni get attacked Aman and Roshni’s magical love story starts once again. The first scene shows Roshni meeting the Jinn to get Aman’s soul back. She summons the Jinn in a dark cave. The Jinn tries to have a deal with her for Aman’s life. He asks her to give away her first child to him. He knows that Ayana and Aman’s child will be special. He puts Roshni in a big dilemma.

Roshni gets speechless to part away from her child. The story goes back and we see Aman struggling to save Roshni from the red moon curse. Roshni dies on eight nights. She gets revived by Aman by taking the help of the moons. She tells Aman that she is fine and he need not worry. Aman stays much stressful for her, since she will be dying for the final time, the ninth time and then even the ninth moon won’t be able to revive her.

The only solution he has is to save her from the death in the very moment when the moon soldiers come to attack. Aman gets his family’s support who safeguard Roshni with love. Roshni tries to relieve Aman. She tells Aman that he has to keep her promise and show her the beautiful sunrise. Aman takes her to the dreamland, where they see a beautiful sunrise, while they fly in the hot air balloon. The moment gets magical for Roshni. She romances Aman right in the middle of the sky. They have some really cute moments, missed until now.

The show returns with a bang just because of Aman and Roshni’s super cute scenes. Aman and Roshni return home and prepare for the worse moment to face. Tabeezi tells Aman that they shall protect Roshni, once the peak time passes then Roshni would be saved forever. Aman knows that he has to protect Roshni from death for once and all, else he is going to lose her. The dangerous night approaches. Aman and his family guard Roshni from all the possible dangers. He wants to fight the death and also their ill fate.

Tabeezi gives a protection cloth to save Roshni’s life. Aman asks Roshni to keep wearing it until the danger subsides. Aman and Roshni get on toes to fight the unseen. They get tricked by the moon soldier, who dons Dadi’s avatar to kill Roshni. Aman tries hard to save Roshni on knowing the big trap. Roshni gets stabbed in her stomach by the soldier’s arrow, but stays safe. She tells Aman that she isn’t harmed by the arrow. Aman gets worried and realizes Roshni’s pregnancy on seeing a strange occurrence. The soldier doesn’t spare Roshni and attacks again.

This time, Aman gets the arrow on himself to save Roshni. Aman dies in front of Roshni. Roshni pledges to prove her love for Aman. She vows to get him back to life by doing the impossible. She meets the Jinn to deal for Aman’s life. A rocking episode after a long time is worth watching twice.

Reviewed Rating for this particular episode Yeh Jadu 27th July New Episode Aman Roshni get attacked: 5/5
This rating is solely based on the opinion of the writer. You may post your take on the show in the comment section below.