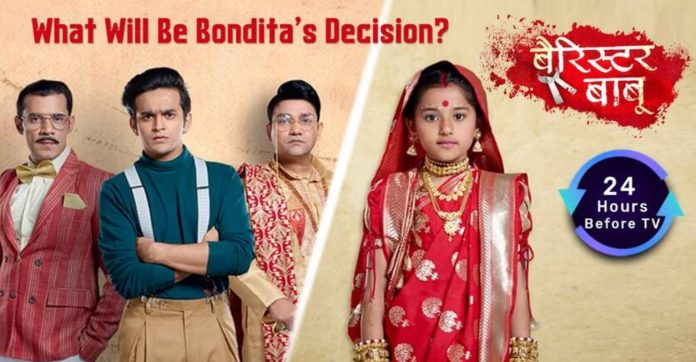 Barister Babu Update Preview Trilochan hides his plans Anirudh gets Bondita’s mum Sumati as a surprise for her. Sumati gets hesitant to stay there. Anirudh makes her feel comfortable. Anirudh brings Sumati to Bondita and unites them. Bondita gets very happy to see her mother in front of her after a very long time. She tells Sumati that she missed her a lot. She asks her if she didn’t miss her.

She tells her that Anirudh takes much care of her. She talks a lot about Anirudh’s family. Anirudh leaves them to talk. Bondita tells about the elders in the family. She feels happy to have them. She takes Sumati to show the entire house of Roy Choudharys. Sumati finds her very happy. She thinks she has come for a purpose and can’t tell anything to Bondita right now to spoil her joy. She stays quiet. Bondita shows her Anirudh’s study. She tells how much he loves to read books. She finds Anirudh reading something again.

She tells Sumati that Anirudh is a barister. Sumati knows much about him and is proud that he always supports Bondita. Bondita gets emotional and tells that she would not like Sumati to go away now. She wants Sumati to be with them. Sumati can’t live in Trilochan’s house. She wants to take Bondita with her until Trilochan gets done with the puja. Trilochan thinks he has found a good solution by calling Sumati home. He doesn’t want Sumati to reveal his plans to Anirudh and Bondita. He is sure that she won’t go against him. Anirudh and Bondita spend time with Sumati. Anirudh wants Bondita to share her problem with Sumati.

He hopes that Sumati gets some solution for it. He doesn’t lose in his struggle to get help for Bondita. He feels that he will win Binoy’s challenge. He doesn’t want Bondita to leave the house. Bondita tells Sumati how much Anirudh and his family are suffering because of her problem. She wants Sumati to sort it out. Saudamini meets Bondita and Sumati. Bondita tells about Anirudh and Saudamini’s strong friendship since childhood. Bondita tells her that Anirudh never refuses to Saudamini’s word. Sumati feels there is more than friendship between them.

Saudamini gets sweet-tongued and seeks her blessings. She thinks it won’t be easy to fool Sumati, but she will still try to keep her on her side. Bondita tells Sumati how much Saudamini helped her in dealing with her problem. She doesn’t want Anirudh and his family to lose their reputation and the puja opportunity because of her. How will Sumati help Bondita? Keep reading.

Reviewed Rating for this particular episode Barister Babu Update Preview Trilochan hides his plans: 3/5
This rating is solely based on the opinion of the writer. You may post your take on the show in the comment section below.