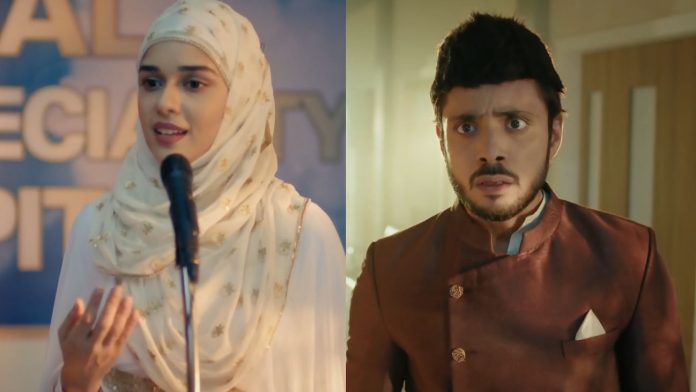 Ishq SubhanAllah Kabir Nargis story begins 3rd August Kabir meets the people at the mosque. He tells them that its wrong to listen to music. He advises the people not to listen to music. He asks the man if he wants to offer prayer at the mosque, then he shall come to pray for the morning prayer as well. Being the Qazi, he tries to make the society benefit from his knowledge. He tells that its a sin to hear filmi songs when they are sitting in the mosque. He tells that music ruins their senses. The man apologizes to Kabir. Kabir asks him to apologize to their Lord, the music is like a poison which spreads in their body.

On the other hand, Nargis helps a sick child by the power of music. She believes in musical healing. She plays the music, which really works in healing the girl from depression. The girl’s mother expresses her sorrow about the girl’s prolonged trauma. Nargis tells her that they should keep faith in their Lord. Kabir and Nargis have different opinions on music. Kabir tells them that their young generation is spoiling due to the music.

He tells that children are misbehaving in front of elders. Nargis asks the lady to have hope. Kabir comes home and gets angry on seeing Amaan dancing on a song. Amaan apologizes to him. Kabir warns him. He wants him to just spend time in worshiping. Nargis tells her guardian, her Guru ji that she is trying to help that girl. Her teacher is very happy with her obedience and talent. She asks Nargis to value her life and be thankful to the Lord. She wants her to always control her emotions. Nargis is much positive. She tells that she isn’t depressed.

She is asked to let the people know about her talents and knowledge at the new hospital launch. Nargis accepts the invite. Kabir discards the idea of inviting a filmi star to the Shariah board function. The man tells him that he had suggested this just to attract many people to the function. Kabir feels its an illness spreading in the community. Kabir is also invited at the hospital launch. He also accepts the invite when given with much respect. Kabir gets a letter from Zara aka Bubbly, who informs him about Alisha and Zaid. She asks Kabir not to search for them. He asks the man to dump the letter.

He feels he has lost the faith on women after Bubbly’s big cheat. He controls his anger. He wants to think good about the women and their good values. He thinks of his wife Zara. He misses her a lot. He gets emotional and speaks to Zara with much feelings. He feels she is always with him. Nargis addresses the people at the hospital and teaches them about musical healing. Kabir arrives there for the launch event. He gets confused when he hears Zara’s voice. He wants to go and see. He gets drawn towards the voice. He gets a huge shock on seeing his wife Zara on the stage.

Reviewed Rating for this particular episode Ishq SubhanAllah Kabir Nargis story begins 3rd August: 5/5
This rating is solely based on the opinion of the writer. You may post your take on the show in the comment section below.