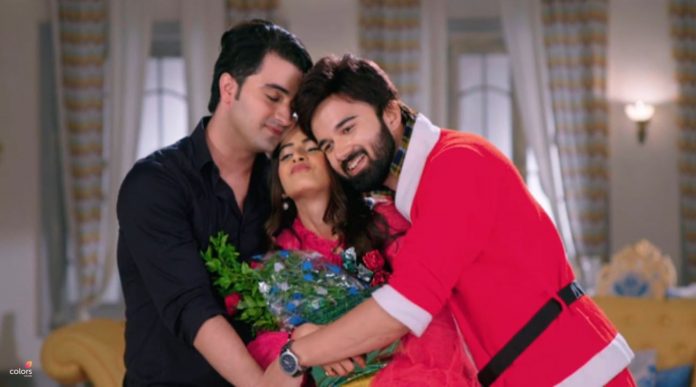 Shakti Heer happy Rakhi moment 3rd August 2020 Heer tells her brothers that she got dirt on her face since she was hitting the stones. She goes and washes her face. She gets revengeful against Virat. She pledges to take revenge on him for insulting her so much. She can’t take him disrespecting her love. Soham asks her to come for shopping for Rakhi. Virat and Jharna come home and dine together. Jharna wants to marry him. Virat wants to forget Heer. He stays affected by her memories. He recalls Heer.

He gets angry when he fails to control his feelings. Jharna tells him that she will cook for him and make him forget everything. Daljeet prepares for the Raksha bandhan festival. Virat feels Heer has entered his life so much that he isn’t able to forget her. He hates her a lot. Soham, Heer and Rohan return home after shopping for the Rakhi festive. Rohan tells Preeto that Heer didn’t have food, she is hurting herself and pretending to be fine.

Heer gets angry thinking of Virat and Jharna. She vents out her anger. She doesn’t know what is Virat’s truth. She gets in a dilemma about him. She hates Virat for breaking her heart. Virat drops Jharna home. She thanks him for being her friend. Virat reciprocates to her feelings. Jharna gets glad. Nutan finds them together. She feels bad for Heer. Virat imagines Heer around and gets upset. He tells Jharna that Heer had come. Nutan realizes that he couldn’t forget Heer. Jharna asks him to make Heer out of his mind.

Nutan meets him and faces his bitterness. She questions him about remembering Heer even when he got rid of her. She tries to make him realize that he still loves Heer. He doesn’t want to believe it. He tries to prove that he doesn’t remember Heer. He calls Jharna back and hugs her. Jharna asks him to always love her. Preeto finds Heer’s room messed up. Shanno tells her that Heer is shattered and failed to forget Virat.

Preeto understands that Shanno wants to see Heer’s destruction. She scolds Shanno for having ill feelings for Heer. She wakes up Heer and asks her to get ready for Rakhi. Heer tries to cover up for the mess. Preeto understands her pain. Heer prepares for the Rakhi festive. She gets surprised when her brothers come with gifts to cheer her up. She celebrates the Rakhi festive with them. They pamper her a lot. They make it sure that she forgets Heer and stays happy with the family. Heer cherishes the happy moment with her family. Preeto wishes that she doesn’t get sorrow in her life.

Reviewed Rating for this particular episode Shakti Heer happy Rakhi moment 3rd August 2020: 4/5
This rating is solely based on the opinion of the writer. You may post your take on the show in the comment section below.