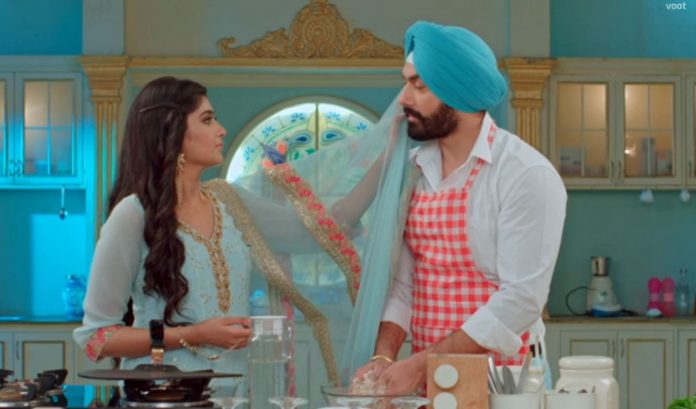 Choti Sardarni Kulwant plans to kill Vikram 10th August Kulwant suspects that Meher is with Manav and they are trying to exact revenge on her. She gets terrified. Meher takes care of Kulwant. She speaks to Param, who complains about Sarabjeet making burnt pizzas. Sarabjeet tells that he will make a proper pizza. Aditi and Vikram are dating. Vikram comes to the hospital to meet Aditi. Meher didn’t get to see Vikram till now. Aditi tells Vikram about Sarabjeet’s wife Meher. Vikram goes to meet Meher. He misses to meet her.

He meets Amrita, who introduces herself. Aditi tells Vikram that that’s not Meher. He asks Amrita to let Kulwant rest. Kulwant finds Manav in her ward and gets scared. Amrita tells that maybe he is Sarabjeet’s friend. Sarabjeet gets tired baking the pizza. Sarabjeet makes the pizza and calls Param to have it. Param goes to have it himself. Meher saves Param by reaching there on time. Sarabjeet takes care of Meher. She suffers a burn.

They make a pizza and enjoy it. Meanwhile, Aditi asks Vikram if Sarabjeet is really behind the scam. Vikram tells that he thinks ahead of such scammers, he can’t reveal anything to his close ones. Aditi feels he is mysterious. Vikram wants to keep the suspense. Aditi tells that she is drawn towards him because of his mystery. He calls her mysterious too. He likes to solve the mysteries. She asks him to give her a surprise date if he wants a tip about the case.

He agrees to her. She reveals that Sarabjeet has given a name to Meher’s baby, which doesn’t belong to him. Meher and Sarabjeet celebrate their fun time. Vikram asks about Meher’s boyfriend. Aditi tells that Meher’s boyfriend was a poor guy, who worked at the Dhaba. Vikram takes care of his family. Aditi finds him a caring person. She tells that he is too rich, but he wants to work for CBI. Vikram tells that its his profession to treat such criminals. Meher asks Sarabjeet not to fight with her. Sarabjeet tells that she initiates the fight always.

She wants him to take some rest and get relieved from the back ache. He calls her touch magical enough to help him get rid of any pain. Kulwant asks Amrita if everyone is missing her at home. Amrita tells that everyone wants her home, she should get fine soon. Kulwant gets pleased to know it. Sarabjeet falls asleep while working. Meher takes care of him.

Kulwant wants to know why Manav has come back. Vikram tells Aditi that a storm is going to occur. He asks her to go for her night duty. He tells that he has a meeting with Sarabjeet. Aditi asks him not to spare Sarabjeet. Vikram asks her if she has any enmity with Sarabjeet. She lies to him. Kulwant hides from him. She thinks to end her fear by killing Manav once again and shutting his chapter. She plans to kill him. Vikram is alert and ahead of everyone’s plans.

Reviewed Rating for this particular episode Choti Sardarni Kulwant plans to kill Vikram 10th August: 3/5
This rating is solely based on the opinion of the writer. You may post your take on the show in the comment section below.