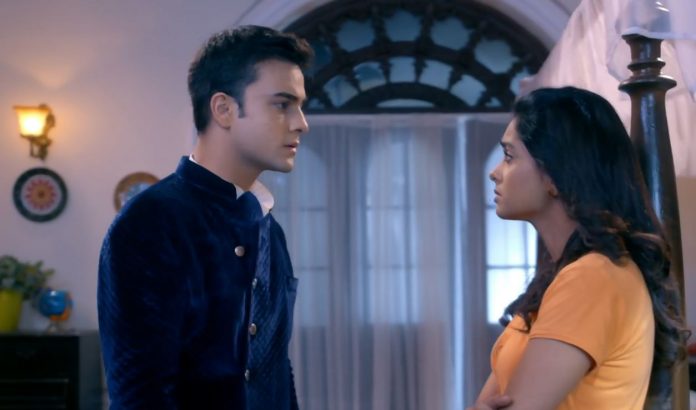 Sanju tells that its tough to change blood relations. He asks her to change her aunt. Rhea asks him to follow Aaliya’s plan for his good. She tells that Ranbir and Prachi will get married if he doesn’t do this. Ranbir leaves the wedding to meet Prachi. He gets Maya’s call. Maya wants him to talk to Dushyant.

He doesn’t want Maya to worry because of Prachi. He wants to meet Pragya and explain her to control her daughter. He thinks to verify Ranbir’s words, if he is saying the truth or not. Sanju tells that he would better die than following their plan. Rhea tells that she wants Ranbir, he should rob the money if he wants to get Prachi. Sanju agrees to her. He tells that he will do as she tells.

Abhi walks in Rhea’s room. Rhea gets relieved that Sanjy got hidden in time. Abhi asks why didn’t she go for the function. Rhea tells that she wasn’t feeling well. Abhi fails to see Sanju in the room. Rhea saves Sanju when Abhi suspects someone’s presence. Sanju feels helpless to spoil Prachi’s life. Prachi gets tensed about the money. She thinks a thief has entered the house. She beats up the thief, only to know later that its Ranbir.

Pragya hears a sound and goes to check. Ranbir asks Prachi to check well before beating anyone. Sanju and his aides come there to rob the money. He tells them that he wants to rob the money, they can keep it, he isn’t interested in money, he just wants Prachi. He gets Rhea’s call. Sanju tells her that he has robbed the money. He asks her not to bother him. Sanju and the aides wear the mask and hide their identity.

Prachi asks Ranbir why did he come by the window. She doesn’t want Pragya to misunderstand them. Pragya knocks the door and asks Prachi if she is fine. Prachi worries and lies to Pragya. Ranbir hides from Pragya. Prachi covers up the matter. Sarita and Pragya try to find out. Ranbir feels scared of them. Rhea calls up Sanju again. He doesn’t answer. He tries to get inside the house. Rhea tells her friend a plan to get Ranbir. Pragya and Sarita go to find the thief. Prachi thinks Ranbir is safe now.

Ranbir tells Prachi that he had come to meet her. He fails to express his feelings to Prachi. She wants him to leave before Pragya sees him. Shahana tells Pragya that she was having a good dream. Prachi apologizes to them for spoiling their sleep. Sarita tells that a thief would be trying to rob the money. Prachi scares Shahana so that she doesn’t come in her room. Shahana goes to sleep in Sarita’s room.

Reviewed Rating for this particular episode Kumkum Bhagya Zee Update Robbery twist 12th August: 5/5
This rating is solely based on the opinion of the writer. You may post your take on the show in the comment section below.