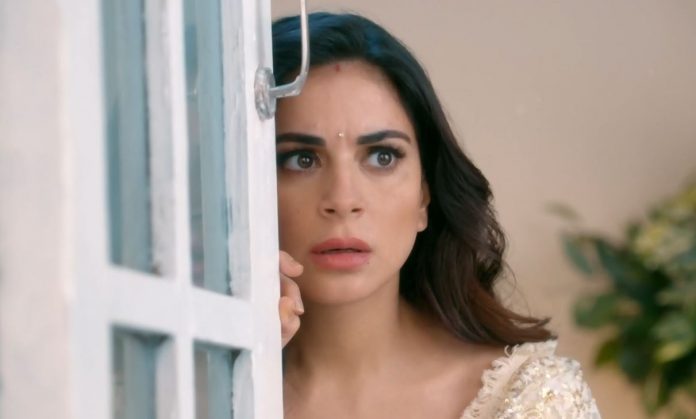 Zee5 Kundali Bhagya Preeta cautious of Sherlyn 12th August 2020 Karan questions Sherlyn about the kidnapper. Sherlyn tells that the kidnapper isn’t here. Prithvi hides from them. Sherlyn succeeds to trick them while they all try to find the kidnapper in the room. Mahira doesn’t want Sherlyn to double cross her. She calls Sherlyn repeatedly. She sees Preeta, who remembers their evil plan. Mahira wants to know what’s Preeta thinking. Preeta warns her against hurting anyone in the family. Kareena asks Mahira not to spoil her special day and be with Karan.

She insults Preeta again. Preeta gets to hear everything silently. Kareena tells that Preeta is finding it hard to witness the wedding, Karan will never love her, he hates her and will prove it to her. She wants Mahira to stay away from Preeta. She accuses Preeta for Mahesh’s condition. She thinks Preeta can harm them for her own benefits.

Preeta wants to secure Mahesh first. Karan doesn’t get the kidnapper. Sherlyn stops Karan from checking the table, since Prithvi is posing as the table. Sherlyn takes the drink. Shrishti snatches the drink from her. She wants Karan to have it. Preeta finds Shrishti and Sameer. Shrishti tells that even she can’t have the drink.

Karan tells Preeta that the drink is made for him. Preeta asks him if his name is written on the glass. Karan gets kiddish again to fight for the drink. Preeta refuses to take it even if he asks her. Karan asks her to have it. Shrishti supports Karan so that he drinks it. Karan and Preeta fight for the drink. Karan tells that he likes to trouble Preeta. He consumes the drink. Shrishti and Sameer get glad that their plan will work now.

She tells Sameer that they shall find the kidnapper. Prithvi gets a bad backache, but feels lucky that he got saved. He asks Sherlyn why did she sit over him, knowing her weight. She tells that she sat over him to save him from Karan’s sight. He doesn’t want police to catch him. He asks her to just think of the place where he can hide. She tells that she has to leave soon. Rishabh gets the police to his room.

Sherlyn asks Prithvi to just hide for a while. Sherlyn tells Rishabh that they can’t go in, Mahira is cleaning her dress. Rishabh tells that he will check other rooms and come. Preeta finds Sherlyn tensed. Prithvi wants to get saved. He gets locked in the cupboard. He asks Sherlyn to save him. She asks him why did he come home. Mahira goes to her room. She wants to look pretty in her marriage. Preeta finds Mahira in her room.

She wonders why did Sherlyn lie. She suspects that Sherlyn is involved in Rishabh’s kidnapping, she is hiding the kidnapper. Sherlyn breaks the cupboard’s handle while trying to open the cupboard. She asks Prithvi not to give her stress. Prithvi tells that he isn’t able to breath. Preeta thinks Sherlyn has hidden the kidnapper. Prithvi tells that he will never trouble her. He wears the mask.

Preeta gets spying on Sherlyn. She finds Sherlyn with the kidnapper, after Prithvi comes out of the closet. She gets a huge shock knowing Sherlyn’s conspiracies. She thinks what is Sherlyn hiding now. Sherlyn gives a knife to Prithvi. She asks him to keep patience, they will soon get the property from Rishabh. She tells that Preeta can’t harm them, she can never come in the house after Karan marries Mahira. Preeta gets worried knowing even Rishabh’s life is in danger. Rishabh asks Sherlyn to open the door fast. Prithvi runs out of the window. Preeta wants to stop him.

Reviewed Rating for this particular episode Zee5 Kundali Bhagya Preeta cautious of Sherlyn 12th August 2020: 3/5
This rating is solely based on the opinion of the writer. You may post your take on the show in the comment section below.