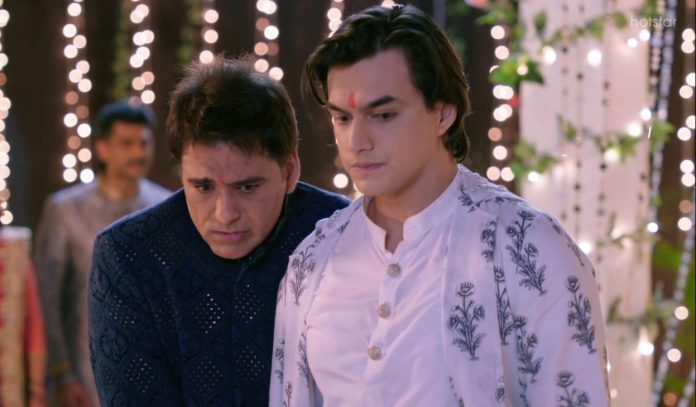 YRKKH Role Reversal twist begins 12th August 2020 Kartik and Naira have a romantic moment while they get decked up for Teej celebrations. Kartik feels she is looking an absolute killer, he is ready to die to get a glimpse of her beauty. Naira asks him to focus on the Teej and stop disturbing her. On the other hand, Suwarna is excited for her 25th Teej with Manish. She awaits him and plans to click their pictures to have memories for lifetime. Manish starts behaving strange.

Suwarna doesn’t notice him and asks him to come for the Teej puja. Everyone awaits the moon. They sing and dance to end their wait on a good note. Teej celebrations get in full swing. They also conduct the Teej katha and puja. Dadi feels happy to see her family together and smiling. She wishes nothing goes wrong now. Kartik and Naira romance ahead while awaiting the moon to end their fast. They have a cute moment.

They sight the moon and inform the family to gather on the terrace for breaking Teej fast. Dadi likes Naira’s special arrangements for Suwarna and Manish. She praises Naira for doing so much. Kartik is also all praise for his wife. The family members break the fast by observing the rituals, while Manish gets stuck at some point. Manish doesn’t listen to anyone when they hint him and ask him to break Suwarna’s fast. Manish’s behavior gets more odd when he reacts violently. He doesn’t break Suwarna’s fast and instead runs away from her, feeling scared of everyone.

Kartik tries to connect with him with love and care. He remembers the doctor’s warning that Manish’s behavior may get strange, which would be a sign of his mental imbalance. Kartik worriedly goes after Manish. He exclaims that Manish is his dad, he should remember their bond. Kartik tries hard to remind Manish, but in vain. Till this moment, Kartik holds some hope. The family breaks down into tears on seeing Manish’s behavior. Kartik saves Manish from getting another hit on his head. Manish realizes how Kartik protected him and starts believing him. Manish sticks to Kartik and gets distanced from the family members. Suwarna tries to talk to him, but he feels terrified. Kartik sees his family crying on Teej.

He calls the doctor to know about Manish’s condition exactly. The doctor gets Manish’s reports. He finds the same condition which he had doubted during the initial diagnosis. He tells Kartik that Manish isn’t mentally fine, he has turned into a child mentally and now Kartik has to care for him like a father. Kartik is ready to look after Manish like a father, but feels shattered with the truth. The family sinks in sorrow due to the accident, which they believed happened by Naira’s mistake. Kartik expresses his grief and turns angry towards Naira. Kartik and Manish’s heart warming role reversal track begins.

Reviewed Rating for this particular episode YRKKH Role Reversal twist begins 12th August 2020: 5/5
This rating is solely based on the opinion of the writer. You may post your take on the show in the comment section below.