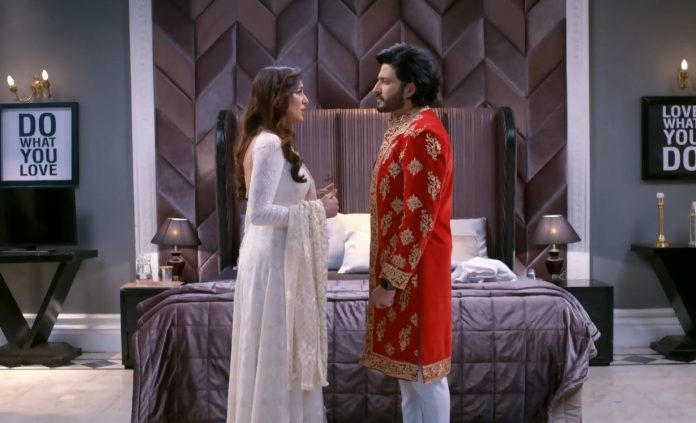 Kundali Bhagya Preeta exposes Sherlyn Mahira 13th August Sameer wants Shrishti to follow him. She tells that she can handle the kidnapper. He tells that he is with her and she doesn’t need to take the risk. She asks if he wants to become her hero and take charge. She doesn’t want anyone to call her helpless. He laughs hearing her silly statements. He tells that he cares for her. She gets shy. Rishabh asks Sherlyn what was she doing. Prithvi manages to run out of the door after Rishabh and police enters.

Preeta looks for the kidnapper. She thinks how did Sherlyn send the kidnapper away. Rishabh asks Sherlyn to take care of herself. Sherlyn stays relieved. Preeta feels bad that Sherlyn is cheating Rishabh for the sake of property and money. She didn’t wish Sherlyn to marry Rishabh. She wants to tell the truth to Karan about Sherlyn. Rishabh finds the kidnapper. He gets police to catch him. Prithvi catches Shrishti at the knife’s point. He asks them to get away.

Rishabh sees the knife and realizes that its the fruit knife which Sherlyn kept in their room. Prithvi manages to flee. He gets saved from the police. Inspector tells that the kidnapper has run away because of their non-cooperation. Rakhi wishes that everything stays fine and Karan gets married. Bani tells that Preeta is responsible for it. Rakhi doesn’t think Preeta is doing this. She praises Preeta. Bani reminds the legal notice sent by Preeta. Rakhi tells that maybe Preeta was much hurt and sent the notice in anger. She knows Preeta well.

She feels Karan did wrong with Preeta. Kareena doesn’t want Rakhi to support Preeta. She wants her to support the family first. She knows that Preeta just wants the money. Rakhi tells that Preeta isn’t totally right, but she isn’t wrong, she has family values. She tells that Preeta has helped them when Rishabh fell in trouble, she can never hurt him. Rishabh tells the family that the kidnapper ran away. He looks for Karan. Sameer asks Shrishti not to meet Kareena. He doesn’t want any new issue. He reminds her goal, that’s to stop Karan’s marriage.

Rishabh tells that police will catch the kidnapper and inform them. Sanjana tells Rishabh that she feels Preeta planned his kidnapping. Rishabh asks her not to say a word against Preeta. He gets upset with her. Preeta reaches Karan to alert him about Sherlyn and Mahira. She tells him that she regards Mahesh as her father. Karan asks her to stop the drama. She asks him to listen to her, if he loves his dad. He asks her not to talk about his family.

She tells him that Mahira had pushed Mahesh down the stairs, Sherlyn and Mahira are planning to kill him after the marriage. She tells that she had heard them talking, Sherlyn planned Rishabh’s kidnapping, she wants his property and that’s her motive. She tells that Sherlyn made the kidnapper run away, he was really hiding in her room.

She asks him to trust her once, Sherlyn and Mahira are evil. She wants him to not marry Mahira. Karan laughs on her story. He tells that he will not believe her, she can’t blame Mahira and Sherlyn. He throws her out. It turns out to be her imagination. She realizes that Karan will call her wrong, Rishabh also can’t convince Karan against Mahira. She thinks of some way to stop Karan’s marriage. Karan wants the cops to find the kidnapper. Preeta knows that Sherlyn is failing in his plans, but she will not stop hurting Luthras. She knows Karan will never trust her after so much wrong happened between them. She prays for a miracle, that Mahesh recovers and tells the truth to Karan.

Reviewed Rating for this particular episode Kundali Bhagya Preeta exposes Sherlyn Mahira 13th Aug: 3/5
This rating is solely based on the opinion of the writer. You may post your take on the show in the comment section below.