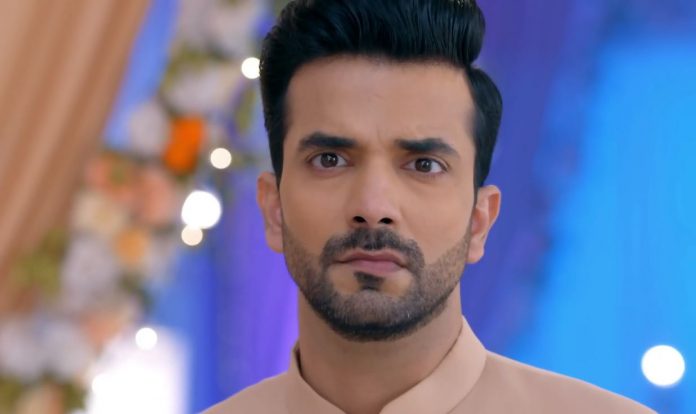 Kundali Bhagya Spoiler Divorce drama Rishabh ultimatum 17th August 2020 Karan tells Mahesh that he wanted him on his life’s biggest day. He feels sorry that he wasn’t with Mahesh on the day when Mahesh got conscious and asked for him. He tells that he hates Preeta a lot, she will be out of the family soon, she is their biggest enemy. He sheds tears of sorrow.

Preeta tells that she will not let Mahira enter the family and take advantage of Karan and her spoilt relation. She tells that Luthras have always blamed her, still she wants to protect them, she married Karan and they are related for births now. She tells that she is dutiful towards Karan and his family. She angers Mahira by showing her sindoor. Mahira tells that Karan will never accept Preeta, he hates her and he will never acknowledge their marriage, their fate isn’t related. She tells that none would cry for her even if she dies. Karan cries for Preeta and his separation. He doesn’t understand the reason. He gets Preeta’s earring there. Shrishti and Sameer get to see Karan.

They wonder why didn’t the pill affect Karan by now. Karan gets angered. On the contrary, Rishabh tells Sherlyn that he was kidnapped in the market, she knew about it and lied to his family. She tells him that she had to lie to the family, since they were getting hyper. He asks her not to lie to him.

She tells that she doesn’t need to snatch his property, all that belongs to him belongs to her as well. He asks her about the fruit knife. She recalls that she had given the knife to Prithvi for his protection. She asks him not to say any nonsense. He asks her not to make stories, he knows everything, he is aware of her truth. He tells that she is the first girl on whom he is shouting, since she has always insulted Preeta and trapped her in conspiracies. She asks him not to blame her. She calls him losing his mind.

He is ashamed to confess that they don’t have any relation. She tells that Preeta has filled poison in his mind. He tells that she has filled the poison in their relation by hiring the kidnapper, she always blames Preeta. Sherlyn loses her cool and pushes him away. She shows her rage to him and leaves him shocked. Preeta tells Mahira that she doesn’t want Luthras to suffer. Mahira tells that she has no time to listen to the nonsense.

Preeta knows that Mahira tried to kill Mahesh and is still planning the same. She tells that she knows that Sherlyn kidnapped Rishabh. She wants to stop them from executing their evil plan. She tells that she will not let it happen. Mahira asks what can she do. Preeta tells that she will save Karan and his family, even if they don’t believe her. Sherlyn tells Rishabh that Preeta isn’t a simple girl, else Karan would have accepted his marriage with her. She wants him to believe her. She threatens him on his face.

Rishabh wants to take a harsh decision about her. He asks Sherlyn what would she do. She tells that he will be responsible for it. He wants to know her limits. Sherlyn doesn’t want Karan and Mahira’s marriage to stop. She controls her anger. She plays the same drama of a helpless innocent woman. She tells that Preeta didn’t wish them to get married, she came up with conspiracies against them.

Rishabh tells that its not about Preeta, since their relation is wrong, he would have acted the same way even if anyone else told him about her. He calls her wrong. She swears on Sanjana that she didn’t plan his kidnapping. Kareena comes to call them for the wedding. She asks Sherlyn to get Mahira from her room. Preeta tells Mahira’s game is over. Mahira stops her by locking the room. She can’t let the marriage stop. Preeta tells that none can stop her from her plans. Mahira attacks her.

She wants Preeta to die. She tells that she hates her a lot. Preeta protects herself and hits on Mahira’s head. Kareena asks Rishabh why is he so upset with Sherlyn. She understands that there is some problem with them. She wants to talk to him once Karan’s marriage gets over. Rishabh shares his feelings with Kritika. She knows him well and believes him. He tells about his doubt on Sherlyn. She asks him not to hide anything from her. He wants to get proof against Sherlyn.

Reviewed Rating for this particular episode Kundali Bhagya Spoiler Divorce drama Rishabh ultimatum: 3/5
This rating is solely based on the opinion of the writer. You may post your take on the show in the comment section below.