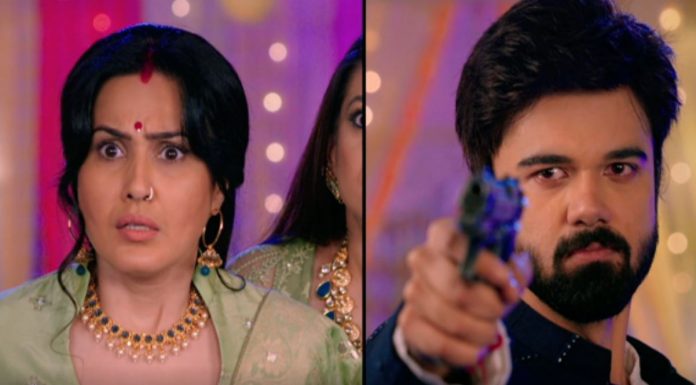 Shakti Soham shootout twist Upcoming 18th August Soham agonizes in pain and anger over Heer’s identity truth. He wasn’t aware of her birth secret till now. When he has learnt the bitter truth, he decides to kill her. Heer and Preeto dance happily with the family, while Virat celebrates with his family. Soham can’t take the truth. He shatters down. Shanno witnesses his rage.

She wants to provoke him further, knowing how much he hates Heer. Soham recalls the promise he had made to Heer. He promised to always protect her and her happiness. Parmeet asks Gurvinder to get Virat and Jharna engaged. Gurvinder asks Virat to get engaged to Jharna on the auspicious day. Virat wasn’t prepared for this. He asks her the reason for proposing this idea suddenly.

Parmeet acts supportive of him. She tells that its Gurvinder’s excitement for his marriage. Sant tells Virat that his relation will get official after the engagement, both the families will wait for his decision of marriage, he may take time and decide it himself. He wants to give time to Virat so that Virat doesn’t feel unfair.

Virat agrees for the engagement, knowing Parmeet and Sant are making Gurvinder insist him. He gets engaged to Jharna. Virat imagines Heer around. Heer questions his feelings. She asks him to admit that he still loves her. He denies his feelings for Heer. The family gets happy for Virat and Jharna. Heer feels like losing something precious. She stops dancing the moment he gets engaged to Jharna. Preeto asks the reason.

Heer tells that she isn’t feeling well, maybe due to tiredness. Soham is stumbled by the shocking revelation. He faces Shanno and tells that he will oust Heer from the house. Shanno takes him along to further brainwash him. She tells that the family will not let him oust Heer. Soham feels cheated by the family. He wants to take the drastic step, since the ugly truth was hidden from him.

His rage gets out of control. She tells him that just Harman supported Soumya from the society, but Heer has the support of entire family. Soham tells her how Harak and Rohan cheated him by wrong evidences. He doesn’t want to spare them. She tells that they involved her in the lie set up. She calms him down. She tells him about Varun’s move to oppose Soumya, but he had faced troubles. She wants him to make a plan against Heer to win the game. Soham finds Heer requesting Mahi for the dance. He loses his mind.

He remembers his promise. He shockingly points the gun at Heer. The family doesn’t know what happened to him that he got so mad. Harak and Preeto stop him from hurting Heer. Heer gets a huge shock to face his shocking hatred. Heer asks Soham if he is joking to threaten her life. Soham tells her that he isn’t joking, she has no right to live on the world. Shanno stops Preeto from saving Heer. He tells her that he got to know her truth, that she isn’t different from Soumya, she is also a kinner by birth.

Heer can’t believe the truth. She shatters on knowing it. The family gets into a big shock to find Heer facing the truth. Virat vents out his anger when Heer’s memories trouble him. He wants to end her memories. He feels Heer has complicated his life. Gurvinder realizes that he still loves Heer. Virat feels incomplete without Heer. The family tries to stop Soham from shooting Heer. Soham shoots down Heer, much to their shock.

Reviewed Rating for this particular episode Shakti Soham shootout twist Upcoming 18th August: 2/5
This rating is solely based on the opinion of the writer. You may post your take on the show in the comment section below.