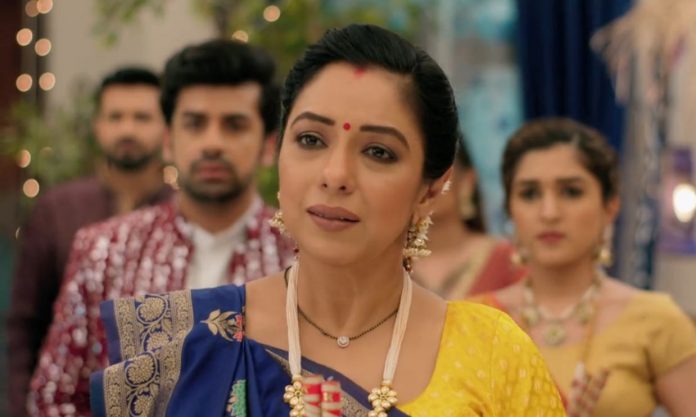 Anupama Vanraj Unexpected drama 18th August 2020 Vanraj and Anupama perform in the celebrations at home. They dance on the request of the family. Baa finds them really like Kanha and Radha. Anupama gets overjoyed and feels the moment should stop. Vanraj realizes Anupama’s dancing talent. Kavya feels out of place. Vanraj doesn’t pay her any attention. Kavya wants to leave. Rakhi reaches them and finds Kinjal dancing with them, dressed in the traditional clothes like Anupama.

She stops the music and shouts at them for trapping Kinjal for the sake of her richness. Kinjal doesn’t want Rakhi to humiliate her in front of everyone. She faces Rakhi’s anger. Rakhi doesn’t listen to Kinjal. She rages that her daughter didn’t answer her calls and instead became Anupama’s shadow in Shah family. She can’t stand Kinjal’s traditional look and her attachment with Shah family. Anupama gets helpless to intervene and support Kinjal. Anupama asks Rakhi not to scold Kinjal publicly, they can go home and discuss things.

Rakhi tells that she isn’t able to identify her daughter. Kinjal accepts her mistake that she lied to her parents and came in the function, knowing Rakhi would never permit her. Anupama understands that Kinjal isn’t completely wrong. She makes Kinjal apologize to Rakhi. She asks Rakhi to dance with them and also celebrate the festive. She tells that they will soon become relatives. Rakhi loses her mind on hearing this. She shoves away Anupama. She tells that she visited their family but doesn’t mean that she has fixed Kinjal’s marriage.

Rakhi gets angered at Anupama for changing Kinjal. She accuses Shah family for pleasing Kinjal and trapping her so that they can get a huge dowry in the marriage. She humiliates Anupama a lot. Vanraj silently tolerates everything so that things don’t spoil for Paritosh. Kinjal wants Rakhi to stop accusing Anupama. Anupama sheds tears. Paritosh and Samar feel bad for her. They know Rakhi is wrong. Baa takes a stand for Anupama.

She limits Rakhi from insulting them. She defends her family, who hold high esteem and respect. She tells that Vanraj earns well and they are also rich, they aren’t after Kinjal’s money. She tells that even if their status don’t match, they had agreed for the alliance only for Paritosh and Kinjal’s happiness. She asks Rakhi to forget the matter if she wants Kinjal happy. She tells that Paritosh will marry any better girl if not Kinjal. She lectures Rakhi to the level that Rakhi apologizes to them. Rakhi tells them that she thought Baa and Anupama are greedy, but actually they want to make Kinjal a house servant like Anupama.

She tells that they are uneducated and won’t understand the importance of career. She tells that they don’t care for Kinjal’s studies and career, they just want a helper added to the family. She insults Anupama further. The family feels bad watching it. Vanraj breaks his silence and defends his wife. He warns Rakhi against insulting his wife. He scolds Rakhi for crossing her limits. Anupama feels proud to be his wife when he expresses his love for her. His unexpected move leaves Kavya upset.

Reviewed Rating for this particular episode Anupama Vanraj Unexpected drama 18th August 2020: 5/5
This rating is solely based on the opinion of the writer. You may post your take on the show in the comment section below.