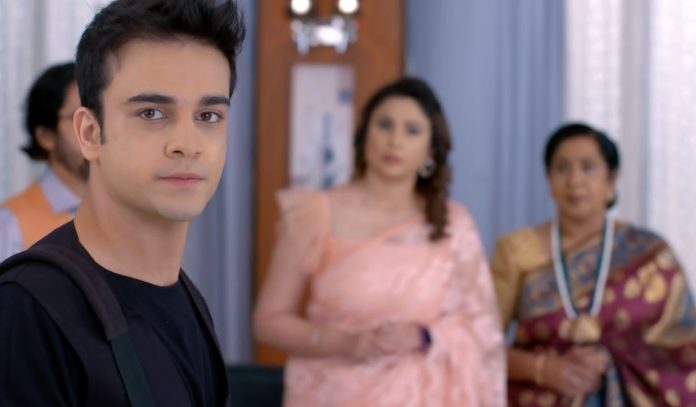 Kumkum Bhagya Upcoming Episode 19th August 2020 Ranbir informs Abhi that he had hired an agency to find out the real thief. He rushes to find out the truth. Abhi wishes him luck. Vikram calls Abhi to apologize for doubting Prachi. Abhi tells him that Prachi is innocent, Ranbir has gone to find out the thief, very soon he will prove Prachi’s innocence. He asks him to inform Aaliya as well. Vikram tells him that he is really sorry, he didn’t wish any complications.

He informs Pallavi about Abhi’s news, that Prachi is innocent in the robbery case. Pallavi tells that she will inform Aaliya, she felt bad since she trusted Prachi before. She regrets to scold Prachi. She tells Vikram that she will apologize to Prachi for her wrong suspicion. Aaliya meets Sanju to get the money. She asks him to show his phone and not keep any call recording. He tells that he trusts her, but she doesn’t trust him. She asks him to give the cash.

He tells her that he will handover the cash to her in some hours. She asks him to meet her in the backyard when he is ready with the cash. Pallavi informs her about Ranbir nabbing the real thief and proving Prachi innocent. She tells that they made a mistake to suspect Prachi. Aaliya can’t believe it. She gets alert. Meanwhile, Rhea asks Pragya about her thought on mind. Pragya tells that she wants to gift a pious bracelet to her, which holds her belief.

She recalls that she had earlier gifted it to Abhi by praying for his happiness. He wanted her to wear it and stay happy, so that he stays happy. He tells her that she should obey him if he wants his happiness. She cherishes his memories. She tells Rhea that she cared for that person a lot and now she wants to give it to her. Rhea understands her. Pragya calls her a perfect daughter to understand her emotions. She asks Rhea to keep it with her and not feel alone. Rhea asks her to make her wear the bracelet. Pragya makes her wear it. Rhea finds Dimpy there, who seeks her help to fix her car. Rhea asks Pragya to wait for her in the car.

Aaliya slaps Sanju and scolds him for not doing his work well. She tells his big blunder. She tells that Ranbir’s spy has caught his aide. Sanju can’t believe it. She tells that she can do anything for Rhea. Her plan flops because of him. She tells that he is totally useless, he can’t do anything well. Sanju feels he always falls in problem when Rhea hires him. Dimpy tells Rhea that her car is okay, she wanted to ask her about Pragya.

Aaliya calls up Rhea. Pragya asks Rhea to talk to her aunt. Rhea asks her to answer the call and inform Aaliya that she will talk to her later. Pragya answers the call. Aaliya recognizes her voice and gets confused. She thinks she is too stressed due to Sanju’s mess. She doesn’t think Pragya is in the city. Rhea tells Pragya about her aunt, who loves her a lot, more than Abhi does. Pragya recalls Aaliya on hearing about Rhea’s aunt. Rhea tells that her aunt is very possessive about Abhi and her.

Pragya asks Rhea to promise that she will not take any decision impulsively. She wants her to stay calm and decide. Aaliya calls Rhea to ask about the lady who answered her call. Rhea tells that she is with Prachi’s mom. Aaliya gets relieved. She asks Rhea to come fast, their plan has flopped, and they need to work out something. Rhea drops Pragya and asks her to take care. She rushes to meet Aaliya. Rhea wants to know what went wrong. Ranbir tells Aryan that they got the cash, while the aide has run away. Ranbir tells that Prachi will be proved innocent now. He informs Abhi that he got the cash from the robber, who fled. He tells that the cash is the proof of Prachi’s innocence. He doesn’t want anyone to blame her again.

Abhi is glad by the good news. She asks Prachi to come home with him so that everyone who doubted her apologizes to her. He wants her to give her a clean chit. Pallavi asks Vikram why did Abhi call Aaliya home. Vikram tells that Abhi asked him to call Aaliya before he comes. Aaliya asks Rhea not to worry, she will handle everything. Abhi gets Prachi home to get her lost esteem back. He tells that Ranbir will prove Prachi innocent. Ranbir reaches home with Aryan. He exclaims that Prachi is innocence. He reveals his plan of hiring a private investigator, and solving the case. He gives the news that he has recovered the money. He proves Prachi innocent.

Reviewed Rating for this particular episode Kumkum Bhagya Upcoming Episode 19th August 2020: 5/5
This rating is solely based on the opinion of the writer. You may post your take on the show in the comment section below.