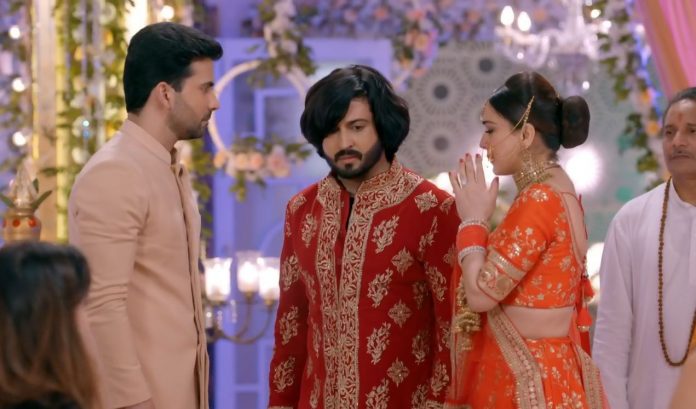 Kundali Bhagya Karan weird reaction 21st August Update Karan and Preeta take the wedding rounds. The pandit guides them the rituals to solemnize. Karan makes Preeta wear the nuptial chain. Preeta recalls her marriage with Karan. Shrishti tries to tie up Mahira and get rid of her. She doesn’t want Mahira to reach the mandap and stop Karan and Preeta’s marriage. Mahira gets conscious and sees Shrishti.

She attacks Shrishti. They both have a fight. Shrishti doesn’t want her to ruin Preeta’s happiness. Mahira tells her that none can stop her from reaching Karan. She locks up Shrishti in the room and runs away. Shrishti gets hurt. She fails to stop Mahira. She gets worried that Karan and Luthras will see Preeta as the bride. She calls up Sameer. She messages him to come fast and unlock the door. Sameer gets to read her message.

He worries knowing she is locked in the room. He goes to help her. Preeta hides her face when Karan fills the vermilion in her hairline. He feels upset that he marries Mahira. Preeta sheds tears. She holds mixed emotions. Sameer frees Shrishti. The pandit declares Karan and Preeta as husband and wife. Shrishti tells Sameer that Mahira had gone to the mandap. He doesn’t understand.

Furthermore, Mahira reaches the mandap and shouts knowing the marriage rituals got completed. Shrishti tells Sameer that Preeta swapped Mahira in the mandap, Preeta has married Karan. Karan and Luthras are shocked to see Mahira. They wonder who is the bride. Mahira shouts on Preeta and denies to accept the marriage. Karan lifts the veil to see his wife’s face. Karan and his family get a huge shock on seeing Preeta.

They hate Preeta even more for the big deceive. Karan doesn’t know if he should be happy to see his soul mate Preeta or hate her knowing her crime to take Mahira’s place. Mahira tells Karan that Preeta had replaced her in the mandap. She attacks Preeta in rage. Karan saves Preeta from Mahira’s rage by a hug. He gets hit on his head and succeeds to save her. Shrishti gets glad to see Karan’s shocking positive reaction. Sherlyn asks Karan if he knew that Preeta is in the mandap.

The family tells them that Karan hates Preeta, he didn’t know about her. The family reprimands Preeta. They get angry on Preeta and insult her again. Rishabh knows that Karan would have not married Preeta if he had known the truth. He is glad that Karan married her. Karan tells Preeta that he knew that she is his bride. He gets angry on her. His emotions change in a moment. Mahira tells Karan that Preeta cheated them. Karan tells that Preeta is a live deceive. He blames Preeta for Mahesh’s condition.

He counts her crimes as fed in his mind by Sherlyn and Mahira. He tells that she is really unlucky for them. He asks Rishabh to see how Preeta broke their trust. He insults Preeta in front of everyone. Bani asks Karan to not waste his time and make Preeta away. Kareena and Ramona blame Preeta for attempting to kill Mahesh and Mahira. Sherlyn adds fuel in the fire that Preeta tried to break her marriage. She asks Preeta why is she taking revenge.

Consequently, Bani rebukes Preeta for breaking their trust. Kareena wants Rakhi to see Preeta’s backstabbing deed. Rakhi sheds tears. Preeta answers Luthras. She asks them what mistake did she do if she married her husband again. Karan tells that he isn’t her husband. She knows that Karan is blinded by ego and anger. Shrishti supports Preeta. She tells that Preeta is his wife, he also cheated to marry Preeta, their marriage happened in front of her family first and now in front of his family.

She tells that both the families witnessed the marriage. She asks Karan not to let anyone insult his wife. Mahira asks pandit to void the marriage. Rishabh tells Karan that the blames on Karan are wrong. Karan asks him not to interrupt in his life. Rishabh wants to tell him the truth that Preeta isn’t wrong. Rishabh finds Karan accusing Preeta. He supports Preeta. He angrily raises hand on Karan. Preeta stops Rishabh for the sake of their friendship. Karan scolds Preeta for making his brother against him. Shrishti asks Bani and Rakhi to support Preeta.

Reviewed Rating for this particular episode Kundali Bhagya Karan weird reaction 21st August Update: 1/5
This rating is solely based on the opinion of the writer. You may post your take on the show in the comment section below.