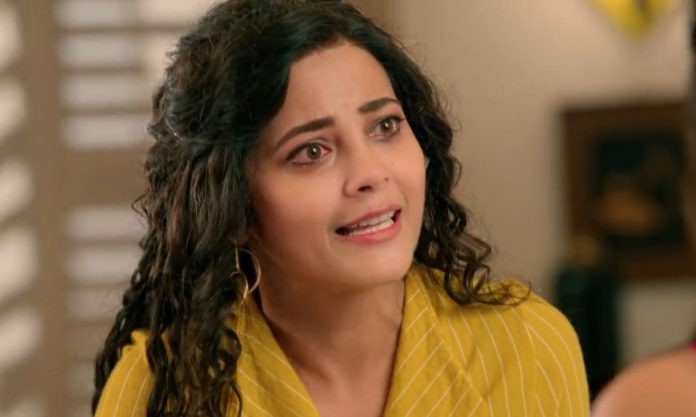 Rishtey Pyaar Kuhu curse for Mishti 20th August 2020 Mishti gets much upset when Kuhu speaks much ill about her. Kuhu curses her to soon see a day when she gets all the limelight and Mishti weeps in some corner of the house. She feels Mishti is the attention seeker. She behaves much odd and goes on to accuse Mishti for a petty issue. She gets upset that her picture didn’t come on the magazine cover, and now her followers will troll her for the unfulfilled promise.

She blames Mishti for intentionally getting the limelight in front of the press and getting her photo printed on the cover. Meenakshi asks Kuhu to stop blaming Mishti. She tries to end their fight by asking Kunal and Mishti if they knew about the photo swap before. Kunal had no idea that the press will choose Abir and Mishti’s Janmashtami celebrations picture. Mishti tells Meenakshi that she didn’t know anything about the picture swap, else she would have not spoilt Kuhu’s happiness.

She defends herself. Kuhu tells that Mishti is taking revenge since the jhanki got spoiled by mistake. Mishti doesn’t want to hear further nonsense. Parul stops Mishti knowing she is more sensible. Kuhu continues to hurt Mishti’s sentiments, while Abir and entire family watch the drama in a helpless way. The family doesn’t expect anything else from Kuhu. Mishti angrily accepts that she has changed the picture since Kuhu didn’t deserve to come on the cover page.

She fumes on Kuhu by recalling the curse. Kuhu asks her to admit the truth. Mishti doesn’t care what Kuhu thinks. The sisters’ fight goes on. Abir and Kunal get troubled. Kunal tries to pacify Kuhu, who blames Mishti still. He explains her that he doesn’t care if his picture doesn’t get published. He tells that he loves Abir and his success, it doesn’t matter if Abir’s picture came on the cover page. He explains the relation between Abir and him, such are brothers who are doting. He expects Kuhu and Mishti’s relation to become such.

Kuhu doesn’t listen to him. Meenakshi wants her sons to sort the fight so that the house retains the peace. She doesn’t want Kuhu and Mishti’s fight to ruin them. Kuhu wants Mishti to apologize to her. Mishti loses her cool when Kuhu doesn’t stop her ill talks. She doesn’t want to apologize. Abir tries hard to calm down his angry Chorni and make her think of Kuhu’s sorrow. Mishti tells him that its not her mistake and she will not say sorry at any cost.

Abir asks her to think for the family at least. Mishti agrees to forgive Kuhu. She tells Abir that she will try to fix the issue. Abir informs Kunal that Mishti is going to sort the issue by speaking to the magazine head. Kunal asks Kuhu to forget the matter now, Mishti is trying to fix things. Kuhu asks him to get Mishti to apologize. Kunal and Abir are much tensed seeing the way the matter is dragged. Meenakshi tells them that she will handle the important meeting from home, but they have to handle their wives in a better way so that their fights came to an end. She is fed up of their non-stop fights.

She tells that Jasmeet will brainwash Kuhu again and make her fight Mishti. Abir and Kunal get Jasmeet’s call on the landline and avoid her. Jasmeet fails to talk to Kuhu. She fills Varsha’s ears against Mishti by showing the magazine cover. Varsha gets against Mishti and fights with Rajshri. She wants Kuhu to be happy. Mishti tells Parul that she knows Kuhu is kiddish and had forgiven her. She tells that she is trying to end the confusion thing. Parul gets pleased with her. Mishti tells that she will call Vishwamber to take help in this matter.

Mishti overhears Rajshri and Varsha’s bitter argument on the call. She gets disturbed that Kuhu is the reason for ruining their family peace. She rages and shouts to call Kuhu. She vents her anger on Kuhu and scolds her like an elder sister. Kuhu blames her back. Mishti tells that Kuhu dragged the fight so long that two families got affected. Their argument turns more critical. Abir and Kunal can’t help themselves. They decide to leave the house where their wives can’t stay in peace. They reach Maheshwari house to become Ghar Jamai.

Vishwamber and Rajshri welcome their sons-in-law with much love. Meenakshi gets upset with her sons’ move. What will happen next? Keep reading and watch the latest promo of the surrogacy track below.

Reviewed Rating for this particular episode Rishtey Pyaar Kuhu curse for Mishti 20th August 2020: 1/5
This rating is solely based on the opinion of the writer. You may post your take on the show in the comment section below.