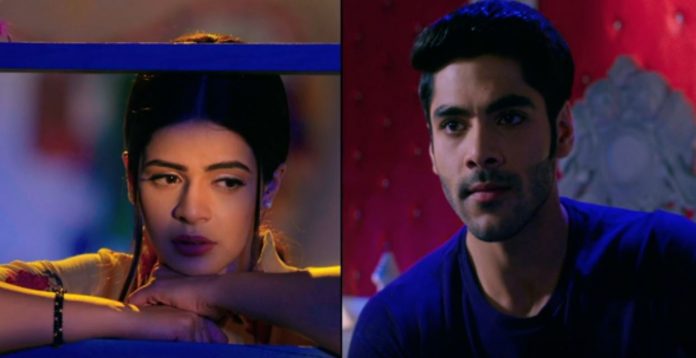 Shakti Voot Update Heer fails Virat 21st August 2020 The saint instructs Gurvinder about the rituals so that she gives a heir to the family. Parmeet wants to compel Gurvinder again. Virat finds the baba at home, commanding Gurvinder. Parmeet asks Gurvinder not to let Virat know anything. Virat asks her if the baba is troubling him. She tells that she has called the baba to talk about his marriage with Jharna. He doesn’t want anyone to pressurize him.

Daljeet tells that Gurvinder is excited for his marriage. He asks Gurvinder to give time to Virat. Gurvinder regrets that her fate is bad, her husband isn’t a good person. She can’t even go to her Maayka. She doesn’t want to make her parents financially weak by burdening them. Heer feels that Jharna has bribed everyone, who got greedy for gadgets.

Virat doesn’t know Jharna’s move. He thinks Heer can’t do anything now. Heer wishes to teach a lesson to Virat. He doesn’t want to see her in the college. He doesn’t care for her. Meanwhile, Singh family celebrates Ganesh’s arrival at home. They perform the aarti. Virat and his family also welcome the Ganpati and make prayers. Both the families celebrate well and have the aartis performed with much devotion. Virat wants to test Heer’s belief.

Heer prays to find a solution to get back to the college. She gets an idea to counter Virat. Saaya/Mallika and her kinner friends come there to join the celebrations. Soham gets upset to see the kinners home. Saaya asks Harak and Preeto to give them nek. Preeto tells that she will give the nek. Soham asks the kinners not to come inside the house. He tells that Heer will collect the nek money from them and pay them.

Preeto tells that its also a ritual that kinners come to get money. Soham tells that kinners should leave. He tells that he would leave if they find him wrong. Heer tells him that he doesn’t need to go anywhere, she will collect the money and give the kinners. She asks Harak to give the nek. Harak and Preeto recall Soumya asking Harman for the neck. They feel sorry and get helpless because of Soham’s demand. Raavi asks Preeto not to tell anything to Soham. Shanno thinks Soham found a nice way to insult Heer and the family.

Harak and Preeto give the nek. Heer collects money from everyone. She asks Saaya to take the money and distribute among themselves. Saaya recalls Heer asking for money in her childhood for her sake. Heer asks Saaya to meet her to talk about something important. Soham wants Saaya to leave. He asks her to bless Heer to get married soon.

Preeto tells Soham that they should find a nice guy and family for Heer, they aren’t in any hurry, Heer will get educated and become independent before her marriage. Saaya blesses their family to always have happiness and peace. Preeto blesses Heer. She feels shattered with the sight of Heer asking for nek. She wants Heer to become independent soon. She prays to secure Heer’s future. Virat and Jharna work in the NGO. They wonder why didn’t Heer come. Jharna is glad that Virat is away from Heer finally. She congratulates Virat.

Reviewed Rating for this particular episode Shakti Voot Update Heer fails Virat 21st August 2020: 1/5
This rating is solely based on the opinion of the writer. You may post your take on the show in the comment section below.