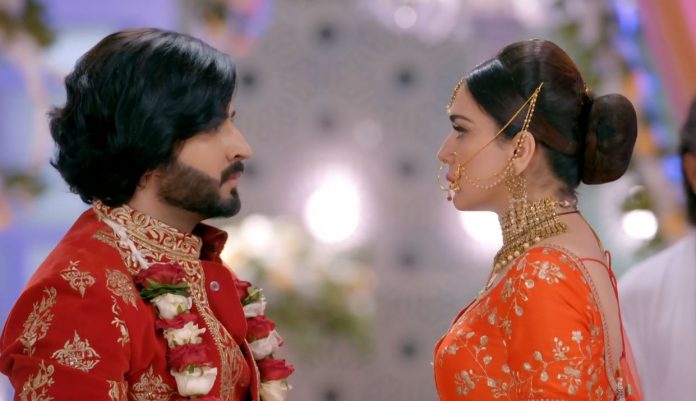 Zee Spoilers Kundali Ishq SubhanAllah Upcoming 24th August 2020 Shrishti is sure that Preeta married Karan with a motive. Kareena tells that Preeta has a motive to loot their property. Ramona tells them that Mahira loves Karan, but she got sorrow in return. Rishabh can’t take Preeta’s insult further. Prithvi thinks to apologize to Sherlyn to calm her anger. He wants to keep good relation with her.

Mahira tells Karan that she knew Preeta won’t let them marry. Rakhi gets speechless. Mahira reminds Karan the legal notice sent by Preeta for seeking the property. Preeta tells them that she hasn’t sent any notice to Luthras. Rishabh believes her, but Karan thinks she is lying. Bani asks Karan to hold Preeta’s hands and take the reverse rounds. She asks him to undo the marriage rituals. Preeta tells him that she doesn’t want to end the marriage. She wants to stay with him. Karan tells Preeta that even he wants her to stay in his house. His statement gets shocking for Mahira. He is confused and tells Preeta that he would take revenge on her.

Zara tells Kabir that Irfan had tried to talk to him. He tells her that he loves her a lot, they can solve any problem together, but music is a problem for their religion. Having knowledge of their religion, he tells that he can’t permit her. He tells that his religion is more important than his love. Zara tells that love is the foundation of religion. She asks him to love people if he loves their Lord.

He feels that Irfan is supporting Zara’s condition. Irfan gets worried since he had supported Zara. He tells that giving a life to someone is allowed in their religion. He tells that Zara isn’t going away from their religion. Kabir asks him to do his duty and stop Zara from walking on the wrong path. He calls it a sin. Irfan tells Kabir that he understands their religion well, he isn’t too emotional for his religions, he has understood Zara and her trueness to their religion.

He tells that saving one life is like saving humanity. He feels she is saving people, she isn’t walking on any wrong path, her musical healing is justified. Kabir can’t believe his opinion. He scolds Ustani for brainwashing Zara and also her parents. He wants to throw her out. Zara doesn’t want him to insult her guest. Kabir and Zara get against again. She wants Kabir to understand her love and not let their second chance end this way. She asks him to marry her. She hopes that every problem gets solved on its own once they marry. Kabir melts his heart on her request.