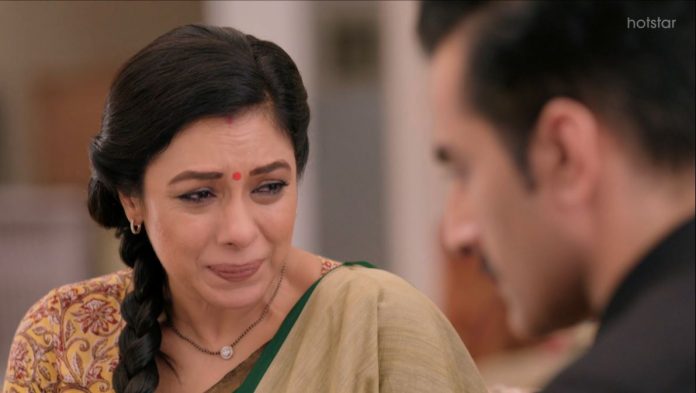 Anupama Today 24th August Shocker for Shah family Paritosh meets Kinjal and her parents. Rakhi wants Kinjal to obey her parents, as Paritosh would be obeying his parents. Paritosh tells them that he has left his family for his love, he can’t live without Kinjal. He tells that Vanraj didn’t agree to Rakhi’s condition, he will never apologize. He wants them to accept the alliance. Rakhi doesn’t think she should agree. She tells that she likes him, but she will want him to become a Ghar Jamai if he wants to marry Kinjal.

She compels him to decide, he can either choose Kinjal or his family. Paritosh gets in a dilemma. He chooses Kinjal and stays back in Dave house. Vanraj is shattered that Paritosh left the house. He shares his sorrow with Anupama. He tells about his immense love for his first child, who made him a father. He tells that he always fulfilled Paritosh’s wishes. He asks how could Paritosh get against him for the sake of a girl. He wants to know if Paritosh will come back.

He calls Paritosh and finds his number switched off. He tells Anupama that he was ready to accept Paritosh’s wish, but Paritosh didn’t give him time. He thinks Paritosh will never return to them. He regrets a lot. Anupama realizes Vanraj’s love for their son. She also sheds tears of sorrow. She feels Paritosh will know the worth of family and come back. They recall the instances of Paritosh’s childhood. They miss Paritosh a lot and cry.

Anupama pacifies him. She asks him to forgive Paritosh when he comes. Vanraj tells that he will not scold Paritosh and accept his every demand. He feels Paritosh has shattered his pride and faith. He wishes that Paritosh returns. He tries to hide his tears. Anupama is sure that Paritosh will not hurt his parents and returns. Anupama and Vanraj miss him when they dine with the family. Paritosh waits for Kinjal and family for dinner. Rakhi tells him that they dine at different times to avoid the unnecessary waiting.

She asks him to have the healthy food prepared by the chefs. Paritosh misses the family and also the food prepared by Anupama. Anupama and Vanraj also leave the food, missing their son a lot. Paritosh realizes that he wants his family. He feels much lonely in Kinjal’s lavish house. Samar and Pakhi also get emotional and shed tears for Paritosh. They wish that Paritosh comes back. Paritosh goes out of the house at night when he doesn’t get sleep. Soon, the shocking news of his death reaches his home. Anupama and Vanraj are horrified by the news.

Reviewed Rating for this particular episode Watch Anupama Today 24th August Shocker for Shah family: 5/5
This rating is solely based on the opinion of the writer. You may post your take on the show in the comment section below.