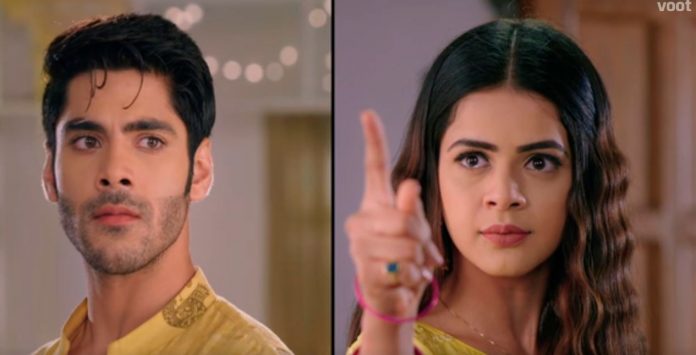 Shakti 25th August 2020 Update Heer threatens Virat Virat drops Heer on the roadside and calls Preeto to threaten her. He informs Preeto that he has dropped Heer on the roadside. He tells her that Heer is coming in his way, she is bothering him a lot and this is the result of her actions. He asks Preeto to come and pick up Heer. Preeto gets a huge shock. She rushes to Harak and tells him that they need to leave. She sees Soham and Shanno. She makes an excuse of shopping to go to Heer. Shanno asks him to find out the truth.

Virat feels for Heer and takes care of her. He gets angered that she is a kinner. He didn’t wish to fall for a kinner. He regrets for his life’s truth. He leaves her alone and goes. Saaya also come to the place to help Heer. Preeto and Harak get worried to find Heer unconscious. Preeto doesn’t want Heer to know that Virat had kidnapped her. Preeto gets her conscious. She asks Heer what had happened to her, if she is hurt.

She tells that they were finding her since long time. Heer recalls the kidnapping. Harak tells Preeto that someone was venting anger for revenge. Preeto doesn’t reveal about Virat. She tells that Heer wasn’t protected by her brothers, so she got attacked. Gurvinder gets tortured by Parmeet again. She feels insulted to stay in the meaningless marriage. Meanwhile, Shanno asks Raavi not to get happy for others. She asks Raavi to at least help Sindhu. She tells her that Preeto got Heer home. She taunts Raavi. Heer is affected by Virat.

She doesn’t know why is he doing this. Virat comes home thinking of Heer’s kidnapping. Heer comes to his house to teach him a lesson. She splashes the water on him. She scolds him for the kidnapping. She presents the ring which she found on the road. Parmeet goes to slap her. Heer stops her. She tells her that she has no right to slap her, she should have slapped Virat in his childhood to make him a nice man. Heer asks Virat to keep himself away from her. Sant asks her how can she blame his son. Heer tells him that Virat used to cry a lot and complain about his dad. She asks him to realize that Virat is wrong.

She tells them that she isn’t related to them now, she isn’t misbehaving with them, she has come to expose Virat’s mistake. She begs Virat to spare her life. She doesn’t want him to bother her. Virat asks her to get out of his house. He discriminates her. Heer gets puzzled by his angry outburst. Gurvinder asks the reason for his statement. He changes his words by recalling his promise to Preeto. Heer asks him to at least be dutiful towards his family. She tells him that he has got defeated and should accept this. Virat expresses his hatred for Heer. She threatens to ruin his life.

Reviewed Rating for this particular episode Shakti 25th August 2020 Update Heer threatens Virat: 3/5
This rating is solely based on the opinion of the writer. You may post your take on the show in the comment section below.