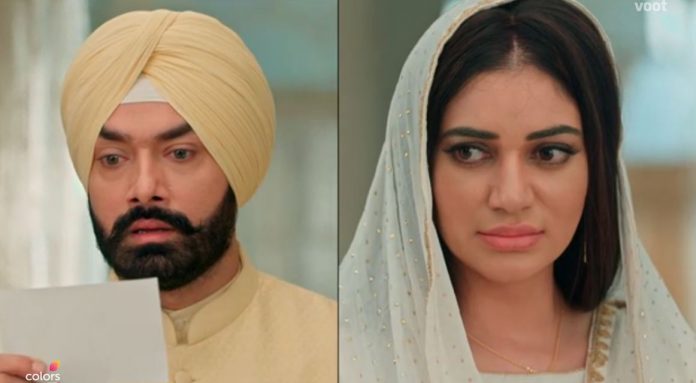 Choti Sardarni Shocker for Sarabjeet 25th August 2020 Sarabjeet and Harleen prepare for their dad’s death anniversary. They explain Param to be at home and take care of everything. Sarabjeet tells that he can’t take children to the Gurudwara and leave his dad alone. Param tells that he will take care of his grandpa. Sarabjeet pacifies him. Amrita informs Meher that Kulwant had gone to Delhi with Bittu and Rana. Meher wants to tell her about Sarabjeet. She asks Amrita to meet her at the Gurudwara.

Meanwhile, Meher’s family reaches Delhi. Kulwant gets to see Vikram’s lavish house. Bittu and Rane don’t think Vikram is Manav. They tell her that Vikram is really rich. Kulwant tells that they have killed Manav, they have to find the truth. She goes to meet Vikram’s family. She tries to meet Surya Pratap Diwan. Meher and Sarabjeet pray at the Gurudwara. Meher meets Amrita. Sarabjeet takes care of little Karan. Meher tells Amrita about Manav’s lookalike Vikram.

She is sure that Manav didn’t survive the attack by Kulwant. She tells that even if Manav returned, she would have not thought of him, since she has moved on with Sarabjeet. She realizes her love for Sarabjeet. She tells Amrita that she wants to confess her feelings to him. She speaks her feelings. Amrita gets glad to know Meher’s love for Sarabjeet. Meher tells that Sarabjeet came into her life and completed her, he is really selfless and true.

Sarabjeet looks for Meher. Meher tells that she loves Sarabjeet a lot, more than her own life. Sarabjeet asks Meher to pacify Karan. Sarabjeet tells them that he wants to stay back and pray for his dad. Meher tells Amrita that Sarabjeet accepted her and Karan as well, which is really a big thing. She tells that Sarabjeet never asks about her past, she is grateful and indebted to him. She promises herself to never hurt his heart. She doesn’t want her past to shatter the family. She tells that she will talk to Kulwant once to know where did she disappear.

Amrita calls Kulwant, who is busy at Vikram’s house. Kulwant and her sons fool the guard to spy in the house. The servant asks them to leave, else Surya will catch them. He reveals the truth that Surya got Vikram a year back in an injured state and made him stay as his son. Kulwant gets shocked to realize that Vikram is really Manav. Aditi visits Meher and Sarabjeet’s house. She asks them to start the play rehearsals.

Sarabjeet tells Aditi about his dad’s death anniversary. He wants to stay at home. He asks her to call Vikram home for the rehearsals. Aditi gets sad to know about her dad. Param asks Sarabjeet about his dad’s name. Sarabjeet asks his sons to take blessings from his dad. Harleen advises Meher to put Karan in the pram. Sarabjeet doesn’t deter and gets blessings for Karan. Aditi recalls the time spent with her dad. She regrets to get away from him.

Harleen wants to tell the truth of their dad to Sarabjeet. She decides to reveal it. Sarabjeet tells Aditi that she is like his sister, even though they aren’t blood related. Aditi gets emotional when Sarabjeet asks her to offer prayers. Meher and Sarabjeet learn that Lalita has left last night. Aditi tells them that Lalita is stuck in a strange problem, her daughter is extremely beautiful and faces much trouble due to her beauty. Harleen wants to talk to Sarabjeet. He asks Meher to accompany him, since she is his wife.

He asks Harleen to tell them the matter. Harleen feels bad to reveal the secret. She reveals about their step-sister. She tells Sarabjeet about their dad’s last wish before death. She shows him the picture of their dad’s other family, unknown to Sarabjeet. She feels much hurt to reveal her dad’s past. It gets shocking for Sarabjeet and Meher. Sarabjeet decides to find his sister. Will he learn Aditi’s truth? Keep reading.

Reviewed Rating for this particular episode Choti Sardarni Shocker for Sarabjeet 25th August 2020: 4/5
This rating is solely based on the opinion of the writer. You may post your take on the show in the comment section below.