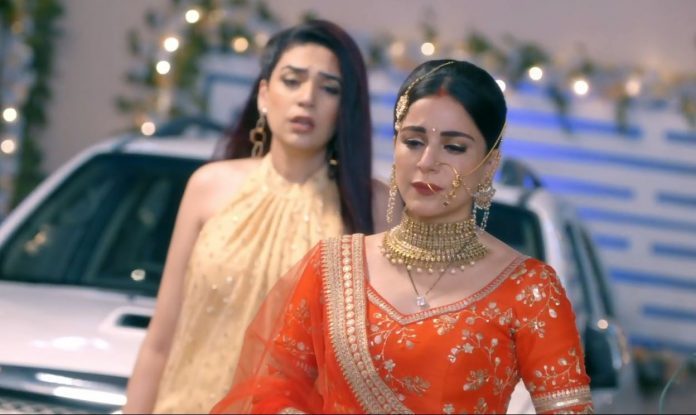 Kundali Bhagya Update Rakhi cries for Preeta 25th August Preeta is much hurt to get ousted from the house. She is worried that she will have to go home and answer Sarla. She asks Shrishti not to blame herself, she is ready to face Sarla’s wrath. She doesn’t care if she is kicked out of Luthra mansion. Shrishti shares her sorrow. Preeta wants her to take her to Sarla. Shrishti asks her not to cry. Mahira asks Ramona how couldn’t she identify Preeta in the dais. Ramona tells her that Sherlyn stopped her from seeing the bride when she insisted a lot. Mahira gets angered.

Ramona tells that she thought Mahira is drunk. She asks Mahira to ask Sherlyn, her best friend. Mahira accuses Sherlyn. Kareena tells that they didn’t know the truth. Mahira tells her that she did a lot for the marriage, its her loss. Sherlyn asks her to think before speaking. Mahira asks Sherlyn why didn’t she cross check. She scolds Sherlyn in front of everyone.

She tells that Preeta came to her and threatened her. She asks Sherlyn if she has provoked Preeta by saying that Preeta is his legal wife. Bani asks Mahira not to fight with Sherlyn. Kareena defends her Bahu. She asks Mahira to deal with her sorrow by being strong. Mahira gets heartbroken. She tells Sherlyn that she had requested her not to hinder the marriage.

Sherlyn doesn’t want her to reveal any truth. She tells that it was not her mistake, she didn’t know about Preeta. She tries to calm down Mahira. Mahira asks Sherlyn not to put the blame on Preeta, who had come on their invite. She tells that its Sherlyn’s fault for instigating Preeta so much when Preeta was just attending the marriage and leaving. Sherlyn asks her to trust her, she was just insulting Preeta. Mahira tells that she will never forgive Sherlyn for this. She feels her dreams to marry Karan got ruined. Preeta is hurt thinking of Rakhi’s decision. She didn’t know that Rakhi will not support her in the tough moment when she needed Rakhi on her side.

Reviewed Rating for this particular episode Kundali Bhagya Update Rakhi cries for Preeta 25th August: 1/5
This rating is solely based on the opinion of the writer. You may post your take on the show in the comment section below.