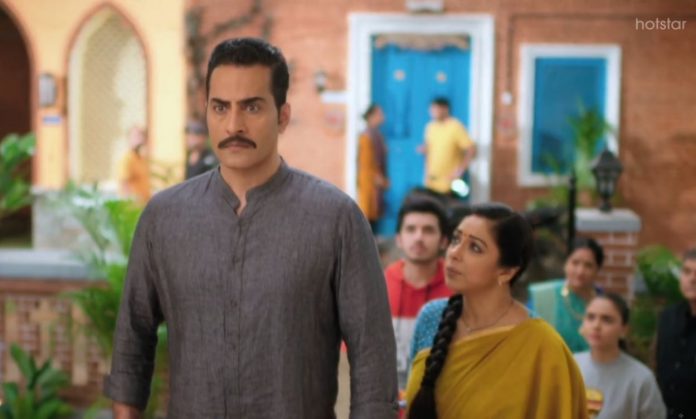 Anupama unexpected side Vanraj raged decision next 26th August 2020 Update Star Plus Anupama learns about Pakhi’s matter. She asks Samar to let her handle Pakhi. She asks Pakhi if the cigarettes pack belong to her. Pakhi tells that she doesn’t smoke, her classmate has kept the pack in her bag to trouble her. She wants Anupama to trust her. Anupama surprises her by trusting her.

Anupama tells her that Paritosh will surely return home, its her faith that gives her strength. Vanraj also misses Paritosh. He doesn’t want to go to office. Anupama tells him that their son will come back, its her faith, Baa has given her hopes and now she has no worries. She pacifies Vanraj, knowing he is a hurt father. Vanraj wishes that her faith doesn’t fall apart. Rakhi arrives there and creates a dramatic scene.

She wants to put an end to Vanraj’s drama by her solid slap. She meets Shah family, who question her about her arrival. Rakhi tells them that she has come to inform them about Paritosh, who had come to her house last night to get a shelter. She reveals that Paritosh is madly in love with Kinjal, he is ready to leave his house and also his parents for the sake of his love. Vanraj gets upset knowing Paritosh’s mistake.

Rakhi tells him that Paritosh had apologized to her and begged her to get him married to Kinjal. She tells that she has agreed to accept Paritosh for Kinjal. She tells Anupama that she wanted Vanraj to apologize to her, she was accepting the alliance before as well, but Vanraj didn’t fulfill her condition. Vanraj tells that he will never apologize to her, she should better stop expecting.

Rakhi tells him that he won’t need to fulfill any condition now, since Paritosh is more smarter and sensible than him, Paritosh has accepted her condition and convinced her for the alliance. Anupama and Vanraj get puzzled hearing about the new condition. Rakhi tells them that she had kept a condition that Paritosh will become a Ghar Jamai (resident son-in-law) if he wants to marry Kinjal. She adds that Paritosh didn’t think twice, and agreed to her condition.

She tells them that Paritosh is ready to abandon his family which isn’t much surprising for her, but would be shocking for them. Its really a big shock for Shah family to know that the elder son had left them for the sake of love. Vanraj can’t believe Paritosh’s decision. He gets too heartbroken. Anupama knows that he is shattered within. Rakhi asks them to accept Paritosh’s decision. Vanraj declares that Paritosh is dead for the family, since Paritosh has ended their relations.

He calls off all their ties forever. He doesn’t want Paritosh to come back even if he wants to. Anupama and Baa cry on hearing his decision. Baa asks Anupama how will they handle the situation. Anupama asks her to have faith, Vanraj always shows anger, not his love, he would also want his son back. She tells that she will get Paritosh back. She promises Baa and leaves to get Paritosh home. Pramod had made the same mistake of becoming a Ghar Jamai when he married Rakhi.

He asks Paritosh to think about his decision again. Rakhi confronts Pramod. She tells him that he got everything after marrying her. She asks him not to hinder Kinjal and Paritosh’s alliance. She takes it on her ego. She wants to snatch Paritosh from his family. She asks him not to come between her plans. Later, Vanraj meets Kavya, who tries to cheer him up. His sorrow is too big. He doesn’t like to spend time with her. He is worried for his family. She gets angry on him. He tells her that he can’t leave his family for her sake. She walks out sadly.

Baa is worried thinking of Anupama who had gone to bring Paritosh back. She hopes that nothing goes wrong now. She doesn’t want Vanraj to get angered on knowing Anupama’s move. She makes prayers at home, while Anupama reaches Dave mansion. Anupama meets Paritosh and tries to fill sense in his mind. She tells that she can respect Kinjal’s parents, but can’t abandon his own parents. Her emotional speech melts his heart. She shows her rights on her son.

Rakhi comes in between and recalls Anupama getting in between Kinjal and her. She wants to hurt Anupama emotionally. Rakhi doesn’t want Paritosh to leave. Anupama shows the strength of a mother. Anupama acts strong and warns Rakhi to stay away from them. She promises to get Paritosh and Kinjal married. She convinces Paritosh to return home, but they face a big shock when Vanraj limits their entry inside the house. Vanraj is hurt that Anupama lowered his esteem again by visiting Dave mansion. He ousts Paritosh and Anupama as well. Will Vanraj leave his anger and accept his family? Keep reading to know upcoming twists.

Reviewed Rating for this particular episode Anupama unexpected side Vanraj raged decision next: 5/5
This rating is solely based on the opinion of the writer. You may post your take on the show in the comment section below.