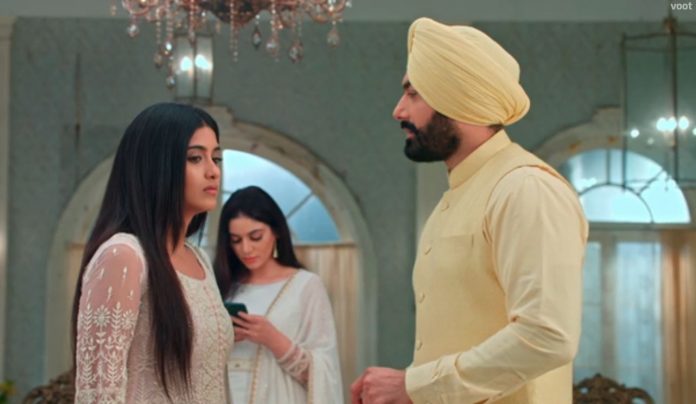 Choti Sardarni New twists to wreck Meher Sarabjeet’s love Aditi informs Vikram that Sarabjeet called him home for the rehearsals. She asks him to get the play script. He asks about the death anniversary function. She doesn’t tell him about her dad. Sarabjeet is shocked to know about his dad’s second family. Harleen tells them that their dad was really a noble man, but he couldn’t accept his second family because of his father.

She tells that their dad wanted to give a good life to his daughter, but their grandpa didn’t allow him. She regrets that it was her dad’s last wish to get rights for his other daughter. Sarabjeet wants to find his sister and give her rights on their family. Kulwant is much shocked to know that Manav is alive, he is Vikram.

Bittu tells them that its good, she is free from the murder blame. She tells that Manav will get them arrested for attempt to murder. She tells that Meher was there when they killed Manav. She thinks to inform Manav. Meanwhile, Param informs Aditi that Lalita broke the inhaler. She asks him not to tell anyone about it. Param agrees to keep a secret. Kulwant calls up Meher to inform that Manav is alive.

Param answers the call and just hears that Manav is alive. He repeats his words. Aditi overhears the conversation. Param tells Kulwant that Sarabjeet and Meher are busy in a meeting. She asks him to inform Meher to call back soon. Vikram calls the servant Ramlal and asks for the news. Ramlal tells them that he has misled Kulwant and told the story that he isn’t Surya Pratap’s real son. He tells that Kulwant fainted and later left.

He asks Vikram why did he make him lie. Vikram tells that he wants to find the truth and made him lie. He admits that he is Surya’s real son and still wanted Manav’s identity for his purpose. He had seen Bittu and Rana at his house. He knew that they wanted to confirm if he is Manav. He thanks his servant. He knows that Kulwant will get it confirmed that he is Manav and then she will inform Meher.

He wants to see Meher’s reaction. Vikram gets the play script from Aditi’s house. He gets to see Aditi’s family picture. Sarabjeet tells Harleen that they don’t know the name of their sister, it will be tough to find her. Harleen tells that their dad used to call her Guddi with love. She shows another picture and they see a mark of identification on Guddi’s neck. Sarabjeet promises to find her and get her into the family with due respect and rights. He tells that he will divide the property equally.

Aditi misses her dad and cries. She prays for his soul peace. She has no complains with him. She remembers that it was her grandpa who did injustice with her. Sarabjeet and Harleen learn that Guddi’s mom isn’t alive now. Harleen feels they got late. Sarabjeet encourages her. He is sure to find his sister. Aditi wants revenge for her mum’s insult. Sarabjeet and Meher come to her. Aditi informs that Vikram is on the way. Kulwant keeps calling Meher. Aditi asks Sarabjeet did he act before, can he act well.

Sarabjeet tells that he was president of his college’s creative society. Meher tells that Sarabjeet will forget his lines for sure. He takes her challenge. He boasts of himself. Kulwant thinks if Manav reached Sarabjeet’s house. She tells that Manav is really clever, he will ruin everything. Sarabjeet gets ready to perform. He shows his charming side. Meher laughs on seeing his funny drama. Sarabjeet tells them that he can also act romantic. He flirts with Meher romantically. Meher falls for him and reciprocates his love. Aditi informs Vikram that they are waiting for him. Meher confesses love for Sarabjeet.

Reviewed Rating for this particular episode Choti Sardarni New twists to wreck Meher Sarabjeet’s love: 4/5
This rating is solely based on the opinion of the writer. You may post your take on the show in the comment section below.