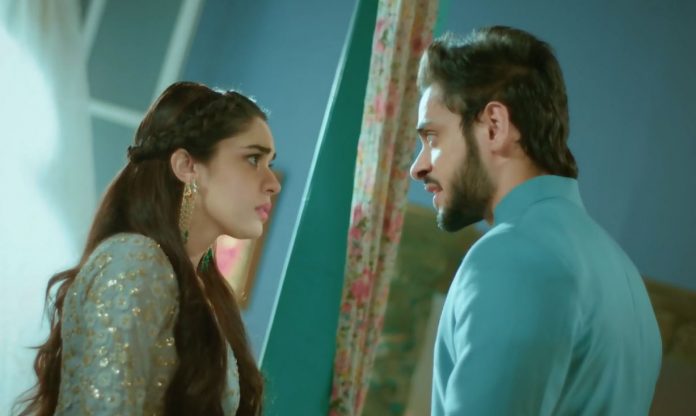 Ishq SubhanAllah Zara’s question leaves Kabir shocked Zara narrates the incident when the people were allowed to play music to express their joy and emotions. Kabir asks her not to refer such statements for the sake of her argument, else she will commit a sin. Kabir hurts his hand in anger. His hand bleeds. Zara and Irfan worry for him.

Kabir excuses himself for a while. Kabir tells Zara that he doesn’t want her sympathy, he can take care of his wound. She finds his letter. She gets emotional reading his letter. He doesn’t want the world to laugh on their love. He realizes that she read his letter. She does the aid to his wound. She tries to heal his wound, but he seems to have lost hopes. She asks him to not stay distant when he loves her a lot. He asks why are they fighting in Shariah board.

She tells him that she can’t back out. Kabir returns to proceed with the matter. Zara shows a proof to support her claim that music can help people. Kabir asks her to mind her words. She tells that people like her will call the forbidden things as permitted. He doesn’t believe her.

He tells that people aren’t offering prayers, they are trying to get away from their religion, families and own selves, they are ending their lives, such people need their religion, not music. Zara asks him to tell about himself, when she was away from him for two years, didn’t he lose hopes. She reminds him that he also lived in depression and struggled each day by losing his faith, he was wishing for death.

She tells that even he always had religion with him, but he had lost hopes, she wants to give a new hope to people to live. She doesn’t think she is wrong. Kabir still calls her wrong. Zara takes the challenge to help Shahbaz recover by giving him a hope though her musical healing. She tells that she won’t open the musical healing centre until she makes Shahbaz fine. Kabir accepts her challenge. Will Zara succeed in her big challenge? Keep reading.

Reviewed Rating for this particular episode Ishq SubhanAllah Zara’s question leaves Kabir shocked: 5/5
This rating is solely based on the opinion of the writer. You may post your take on the show in the comment section below.