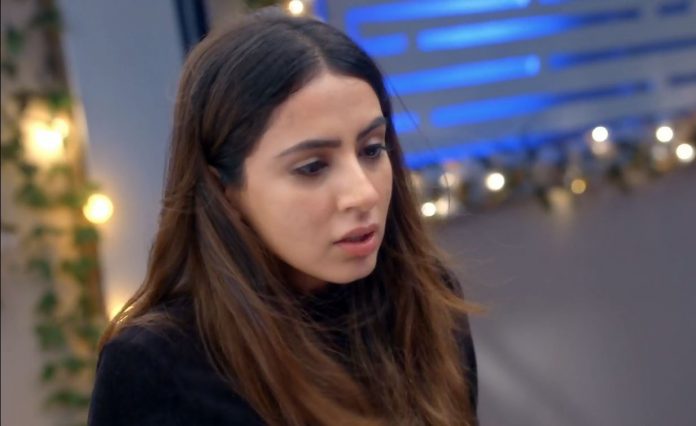 Kundali Bhagya Update 27th August Mahira lashes out Karan and Preeta are in equal sorrow, since they got separated by their fate again. They cry on their Kundali Bhagya. Karan destructs his room in anger. He screams out in pain. He shouts Preeta’s name. Preeta hears her and gets restless. She fails to get an entry in the house. Mahira accuses Sherlyn for stopping her marriage. Sherlyn asks her to stop her madness.

She tells that she was overconfident and did what she wanted. She asks Mahira to see the truth, that Preeta married Karan. She tells that Aroras tried to stop her marriage as well, but she knows to turn the game, she isn’t a loser like her. She warns Mahira to stay in limits. Mahira wants her to shut up. Sherlyn asks her to vent anger on Preeta, its Preeta’s plan to create a havoc in her life. She tells that Preeta is in her life’s lowest point, she should better insult Preeta.

Mahira takes her advice and rushes to Preeta. Shrishti doesn’t find any autorickshaw. She cries for Preeta. She hires an autorickshaw. Sherlyn reaches her and throws the keys of the vehicle. Shrishti asks Sherlyn is she mad to do this. She scolds Sherlyn for falling low and troubling the poor man. She finds the keys. Sherlyn asks him not to take Shrishti in his vehicle. She threatens and sends him away.

Shrishti calls Sherlyn a psycho to always troubles Preeta and her. Sherlyn insults Shrishti. She knew that Shrishti was dreaming to get Karan and Preeta married to get rich comforts in her life. She tells that she has broken Aroras’s dream by marrying Rishabh. She tells that even Preeta failed in her attempt to make a place in Luthra family. She tells that Karan married Preeta, and yet again abandoned her. She feels Preeta deserves to be kicked out.

She tells that Preeta knew her truth, but couldn’t do anything against her. She hurts Shrishti and asks her to remember her defeat. Meanwhile, Ramona wonders who has helped Preeta from their family, someone wanted to stop Karan and Mahira’s marriage. Kareena asks Ramona how dare she doubt her family. She tells that no one from her family stopped her from ousting Preeta. Sanjana tells that Rishabh would have helped Preeta. Ramona feels the same.

She is relieved that Preeta cried and left without using her brain. She tells that Luthras can never believe Preeta’s fake concern for them. She asks them to give her some time and stop talking of the marriage. Ramona feels Mahira is shattered, she loves Karan a lot. Kareena consoles Ramona. Mahira finds Preeta and vents anger on her. Preeta awaits Shrishti. Mahira asks Preeta how dare she snatch Karan by marrying in the mandap which was meant for her.

She challenges Preeta that she will ruin Preeta’s dreams. She doesn’t think Preeta has the courage to kill someone to win her love. She tells that she can kill her to get Karan back. She threatens Preeta’s life as before. She wants Preeta to leave from Karan’s life. She reprimands Preeta. Shrishti reminds Sherlyn what harm she can cause. Sherlyn provokes her. Shrishti asks her to remember that she still holds her secret. Sherlyn knows that Aroras can’t do anything now, Karan or Luthras will never accept the relations with Aroras.

She taunts that Aroras will always be poor and this time, Preeta ruined their family respect as well. She tells that everyone in Luthra house hate Preeta. Shrishti thinks she is right, nobody deserves a good-hearted Preeta in Luthra family. She wishes that Preeta stays happy. Mahira tells Preeta that Luthras have insulted her and ousted her like trash. She asks Preeta to face the reality, she can never get Karan if she marries him again. She lashes out at Preeta. She asks if Sarla has taught her to take this move. Preeta scolds her against dragging Sarla into the matter. Mahira threatens her of dire consequences.

She tells that she will marry Karan. She asks Preeta to throw away her sindoor and mangalsutra, and forget Karan. Prithvi takes the news of Preeta and Karan’s remarriage to Sarla. He informs that he has come with a proposal for Preeta. He shocks Sarla by giving heartbreaking news of Karan abandoning Preeta and throwing her out of his house once again. Sarla can’t believe Preeta’s humiliation. He hopes Sarla accepts his proposal for Preeta. Sarla awaits Preeta home. Will Preeta return home or fight for her rights on Karan? Keep reading.

Reviewed Rating for this particular episode Kundali Bhagya Update 27th August Mahira lashes out: 2/5
This rating is solely based on the opinion of the writer. You may post your take on the show in the comment section below.