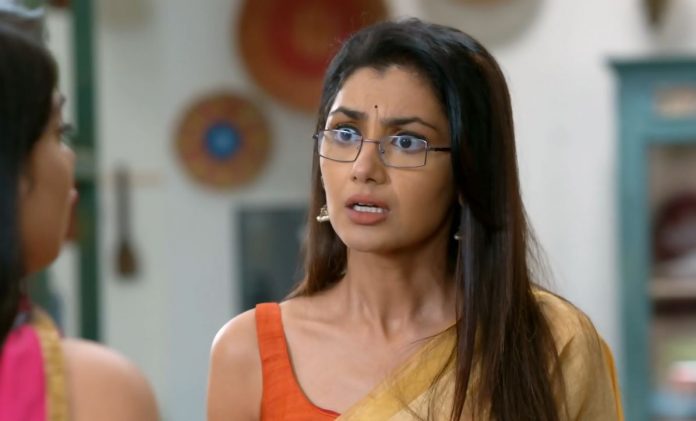 Kumkum Bhagya Upcoming Pragya learns Prachi’s arrest Rhea can’t share Abhi’s love with anyone else. Aaliya pacifies her. Abhi meets Rhea and learns that Rhea is hurt by his words. He tells that she shouldn’t feel bad, he knows that she can’t share his love, like he can’t share her love. He tells that he loves Prachi as much he loves her, he loves them equally. Rhea doesn’t want him to make Prachi equal to her.

Abhi asks Rhea and Aaliya not to trouble him, he has to save Prachi from the mess. Rhea tells that Prachi is the culprit, she should be punished. He tells that his heart doesn’t believe that Prachi is the thief. He proves that he loves her more, he has come after her instead going after Prachi. He cheers up Rhea. On the other side, Ranbir is troubled that Pallavi doesn’t like Prachi and isn’t letting him help her. Vikram asks her to let Pallavi’s anger cool down.

Ranbir tells that Prachi has never given them a chance to complain, since her office’s first day. Vikram tells that he trusts Prachi, but he can’t go against Pallavi. Aryan asks Vikram to think of supporting Ranbir. Vikram asks Ranbir to run away and not listen to Pallavi. He tells that even he doesn’t get scared of Pallavi. Ranbir thanks him and runs out of the house. Vikram gets scared on Pallavi’s house. Prachi is taken to the police station.

She sheds tears and is left with the robbers. She asks them why did they lie about her. She wants them to tell her the truth. She tells that her family will lose faith on her, her life will be ruined knowing the new mess. She asks them to tell truth once. The robber gets emotional on her request. He asks constable to allow him to make a call. He calls up Sanju and informs the arrest. Sanju asks how did it happen.

The robber tells Sanju about Abhi and Ranbir’s move to nab them. He tells that Prachi is innocent, Aaliya framed her again. He asks Sanju to get them out from the lock up, else he will name Aaliya for the robbery. Vikram makes Aryan take Ranbir’s place. Prallavi meets Vikram and gets misled. She tells that she will never support Prachi if she is wrong. Vikram tries to cover up Ranbir’s absence. Vikram makes an emotional drama and asks Pallavi to give some time to Ranbir.

He manages to send her away. Aryan gets relieved. Shahana comes to help Prachi. She tells that she will inform Pragya. She scolds the robbers for their lie. She loses her cool seeing them. Prachi stops her. She asks Shahana to get Pragya soon. The robbers wait for Sanju and Aaliya to come and help them. Rhea tells Aaliya that she isn’t thinking of Abhi’s words anymore. She gets Sanju’s call and is tensed to tell him about his aide’s arrest. Sanju asks her to help his aides. He doesn’t want to talk to Aaliya.

He tells that he doesn’t believe Aaliya, she didn’t keep her promise, Rhea should be away from her aunt. He scolds Aaliya for getting Prachi arrested and also his aides. He asks her to free his aides, who can take her name in front of the police. Aaliya asks him to stop his aides. Sanju asks her how did her plan work, he didn’t even get Prachi. He asks her to hire a lawyer and free his aides from the police custody.

He feels Ranbir and Prachi’s relation has turned strong. Rhea asks him not to harm Ranbir. Sanju asks her not to get mad for Ranbir. Aaliya tells that she will pay his commission. He asks her to send Rhea with the money. Pragya receives the shocking news of Prachi’s arrest. Sarita tells that Abhi is a good person, he had called Prachi home. Shahana tells them how police had come to arrest Prachi, the robbers named Prachi as the mastermind behind the robbery. What will Pragya do to save Prachi? Keep reading.

Reviewed Rating for this particular episode Kumkum Bhagya Upcoming Pragya learns Prachi’s arrest: 3/5
This rating is solely based on the opinion of the writer. You may post your take on the show in the comment section below. Also, get notified of the new posts on your mail by checking into the option.