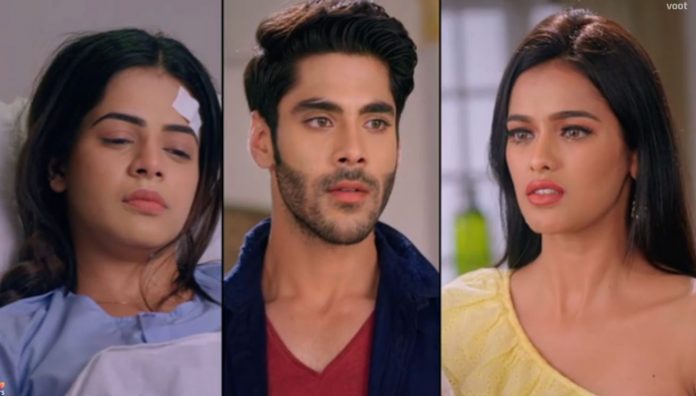 Shakti Heer Virat tangled feelings 28th August 2020 Preeto and Harak question Virat about his visit. The hospital staff also enquires. Rohan tells that they know Virat, he is their relative. Harak asks Virat to answer them. He scolds Virat for kidnapping Heer and doing her accident. He tells that its not Heer’s mistake if she is a kinner. She asks Virat if he has come to see if Heer is dead. Virat tells that he didn’t knock down Heer by his car, he came to check on her on Gurvinder’s saying.

He informs them that someone was trying to kill Heer by removing the oxygen mask. The family members run to see Heer. Soham watches Heer falling short of breath. He cries recalling their moments of childhood. He sees her dying. The family enters the ICU and find Soham with Heer. They get relieved to find her stable. Heer gets conscious. She finds Virat in front of her. Rohan runs to call the doctor. Heer falls unconscious again.

Doctor checks Heer’s pulse. He informs the family that she is out of danger. Virat tells Preeto that he is going home. She suspects him. He asks her to find the real culprit than blaming him. She tells him that maybe his family is involved. He doesn’t want her to blame his family. Harak asks him not to act smart. He asks Virat what would he do if he knows that his family is involved. Virat tells that his mum wanted Daljeet to find Heer’s culprit.

Preeto knows that Parmeet hates Heer and maybe she is behind the accident. She tells Virat that she will make him face the truth. Virat asks her to get clear. Harak asks him to take them home, if he isn’t scared of anything. Harak tells that they will prove his family wrong. Virat asks them to come and get satisfied. Shanno prepares to fake tears for Heer’s death. She selects a white dress to wear on her funeral. She waits for the good news.

Rohan tells Heer that Soham loves her a lot, he is much emotional, though he appears strong. Shanno calls Soham to hear the good news. Rohan takes the call. Shanno asks about Heer. Rohan tells that Heer is okay, but Soham is emotionally shaken. He tells that Soham is crying for Heer. Shanno angrily disconnects. She thinks Soham is a big fool. Virat brings Preeto and Harak home. Parmeet does the aid to injured Daljeet. Daljeet tells that Virat saved Heer at the hospital. Sant wanted Heer to die.

Parmeet and Sant get angry to see Preeto and Harak in their house. Daljeet plays a drama so that none suspects him. He asks Virat why did he get them. Virat tells that his family can never attempt to kill someone. He reveals that Harak and Preeto are suspecting them. Sant advises Harak to have a peace prayer at home. Daljeet tells that they can file a FIR, police will can catch the culprit. He acts sweet. Preeto fails to prove them wrong.

Parmeet thinks she got saved. Virat tells Sant that he isn’t a bad person, he went to check on Heer. Gurvinder thanks Virat for saving Heer’s life. Virat wants to hate Heer. He doesn’t know why he isn’t able to forget her. Jharna surprises Virat. She finds his engagement ring missing. She asks about the ring. Parmeet tells that maybe he kept it somewhere and forgot. Jharna asks him to wear the ring. Heer calls Virat to inform him about the ring. Jharna and his family get to know that Heer has his engagement ring. She asks him to learn keeping his relations and belongings. She regrets that he visited her. She asks him to move on in his life.

Reviewed Rating for this particular episode Shakti Heer Virat tangled feelings 28th August 2020: 3/5
This rating is solely based on the opinion of the writer. You may post your take on the show in the comment section below.