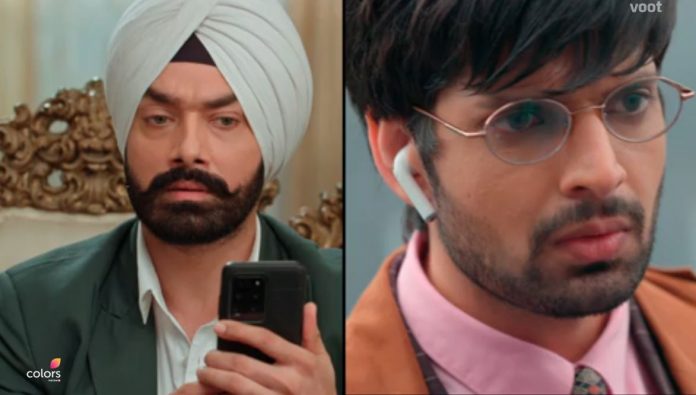 Choti Sardarni 29th August Sarabjeet unaware of Vikram’s ploy Vikram tells Aditi that he can’t drag the case for long. Aditi apologizes to him for leaving the matter incomplete. Vikram tells that he doesn’t want to leave his work incomplete. He shows her the mastercard of Sarabjeet’s international bank account. He tells her that he has got it from Sarabjeet’s safe. He thinks something is wrong, Sarabjeet didn’t reveal about the account to him.

He asks him to just inform him the OTP else Sarabjeet can never get caught. Aditi promises him that she will help him in finding Sarabjeet’s truth. He tells that he is leaving for Delhi. Sarabjeet makes changes in Karan’s room. He doesn’t want any bad memory of the fire incident. Kulwant, Bittu and Rane come home and get worried seeing the burnt furniture. Sarabjeet tells her that everything is fine now.

Param tells that Meher and Karan got trapped in the fire, but Sarabjeet and Vikram saved them. Kulwant tells that no one informed her. Sarabjeet asks how did they come. Kulwant stops her sons from telling anything to Sarabjeet. She rushes to meet Meher and Karan. She asks how did the fire get caught. Param tells Meher that super uncle Vikram left. He tells Kulwant about Vikram. Kulwant is worried. She asks Meher why did she make Manav enter the house.

Meher tells that Vikram isn’t Manav, he just resembles Manav. She asks Kulwant not to blame Vikram. She knows Kulwant is scared because of her sin. Kulwant doesn’t think it was a sin to kill Manav and make Meher’s life better. She justifies herself. She asks Meher to do anything she wants. Aditi meets Kulwant. She tells that they should keep Karan under observation for some more hours. Kulwant asks her to ward off bad sight to secure Karan and family. Meher wards off the bad sight from both her children. She also wants to do the rituals for Sarabjeet.

He tells her that he isn’t a small kid. She tells that bad sight can catch kids and elders too. He tells that he will free her from the evil sight as well. Meher and Sarabjeet get into a moment. Vikram informs his seniors that he can’t wait for legal permissions, he has taken the decision for the sake of his duty. He gets the permission to take action against Sarabjeet. He informs Aditi. He wants Aditi to stay ready for check the OTP. Param wards off bad sight and makes Aditi emotional. He tells her that she is Sarabjeet’s sister, so he will call her Bua from now.

Aditi feels love for him. He thanks him for saving Karan’s life twice. He asks her to take all his toys. He wants to protect her from sorrow. Aditi regrets her plan of making Param mentally weak. She cries. Param wipes her tears and hugs her. She loses in front of his innocence. She doesn’t want to hurt him ever. She wants her revenge on Gill family. Vikram reaches Dubai. He visits the bank, disguised as Sarabjeet. He asks Aditi to inform him the OTP within time, else its over. Aditi finds Sarabjeet’s phone.

Harleen looks for Sarabjeet and answers a call on his phone. She takes the phone with her. Vikram asks Aditi to be ready with the phone. Aditi worries. Vikram recalls getting Sarabjeet’s fingerprints from the glass. His entry gets approved. Harleen passes the phone to Sarabjeet. He stays busy in office work. He wants Harleen to manage the calls. The man asks Vikram to access the locker by entering the OTP. Vikram throws off the fake fingerprint peel. He calls Aditi to pass the OTP. Aditi tells that Harleen took the phone.

Reviewed Rating for this particular episode Choti Sardarni 29th August Sarabjeet faces Vikram’s ploy: 2/5
This rating is solely based on the opinion of the writer. You may post your take on the show in the comment section below.