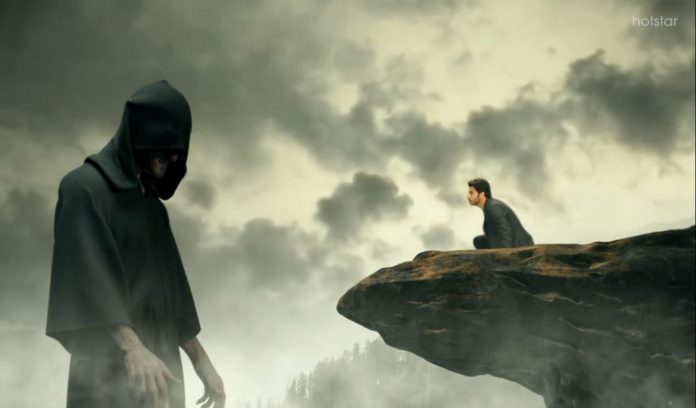 StarPlus Upcoming Trailers Anupama Jadu Shaadi Mubarak Aman and Roshni try hard to defeat the Kaala jinn and protect their baby. They take the help from first Ayana, who takes Roshni’s disguise to fool the Jinn. Rehan, Shayari, Tabeezi and rest of the family members try to help out in the tough time. They want to save the family heir from going into the Jinn’s hands. Roshni is sent away to the black jungle to deliver her baby safely away from the Jinn’s sight.

Roshni and Aman have a moment in their last meeting. Tabeezi gives hope to Aman that everything will get fine. The family comes up with a big melodramatic scene to fool the Jinn and hand over a toy to the jinn instead the real baby. Tabeezi lies to the Jinn about the baby’s special powers, being the son of Jinnat’s king and Ayana. She asks the Jinn not to see the baby until the next sunrise. Ayana asks the jinn to spare Aman’s soul for once and all to complete the deal after taking the baby. The jinn frees Aman’s soul.

He gets cheated by them. He goes away with the fake baby, while the family rejoices over fooling the Jinn with their sly plan. The jinn then learns about the big deceive. He angrily punishes Roshni, who just gave birth to her son in the jungle. Roshni and Ayana face troubles, being attacked by the jinn. Jinn takes away Roshni’s baby. Aman gets worried on seeing Ayana attacked. He fears that Roshni has been attacked as well. He rushes to check on his baby. Rehan and Shayari help him in the search.

They fail to find Roshni and the baby. Aman comes across Kaala Jinn who tells Aman that he would never see Roshni and his baby ever in his life. He asks Aman to forget them, since Roshni has been punished for her huge lie. Roshni falls in grave danger. Aman attacks the Jinn to kill him, but fails miserably. Rehan protects Aman with his powers. Aman’s love compels Roshni to return to him. Her soul reaches Aman to connect to him, but in vain. Roshni realizes that Aman can’t see her, since she has lost her physical body.

Paritosh loses hope of marrying Kinjal. He doesn’t think there can be any agreement between Vanraj and Rakhi ever. He wants both the families to leave their egos and think of the alliance. Vanraj loves his children, but also his pride. He doesn’t want to meet Rakhi, unless she comes home and apologizes for her wrong behavior. Paritosh fears of losing Kinjal forever. He misses the old times when he used to meet Kinjal. Kinjal gets obstructed by Rakhi.

She fails to talk to Paritosh, resulting in his depression. Paritosh loses his focus on his studies and career, being surrounded by Kinjal’s memories. He gets sorrowful and depends on alcohol. He returns home in drunken state, much to the family’s shock. The family finds hard to digest his drunken scene. Paritosh asks Anupama to stay away from him, since she failed to keep her promise. He prefers to isolate himself from his useless family. He takes sleeping pills and faints down. Samar informs Vanraj and Anupama about Paritosh’s possible suicide attempt.

The family gets tensed on his stupid move. While Paritosh gets saved, he tends away from the family. Vanraj orders Anupama to fix up the issues in a day, else she would have to forget the family. Anupama assures Vanraj that she will succeed as a mother, she will handle Paritosh with love.

KT saves Preeti by assuming that she was committing suicide. He asks Tarun to take care of Preeti, who seems to be disturbed. He wishes she gets fine. Rati learns that Preeti has sold the cupboard to KT. After KT leaves, Tarun blames Preeti for insulting him again by acting helpless in front of KT. Preeti gets into an ugly argument with Tarun. She is much hurt that he had tagged her as a thief to save Rati’s reputation in the office. She regrets that her son has stained her self-respect to cover up Rati’s crime.

Thankfully, Preeti gets support from her daughter Juhi. Tarun doesn’t want Preeti to curse him. He feels he is doing a big favor on Preeti by keeping her in his house. He doesn’t feel sorry to sell Preeti’s house without her permission. Tarun insults Preeti badly and hurts her esteem further. She objects to receive insult from her son. She wants him to either respect her or let her free to leave the house. Tarun doesn’t think she deserves any respect. He orders her to leave his house if she has a problem to stay according to his conditions.

He is fed up of her values and principles. He commands her to get away forever, since she means nothing to him. Heartbroken Preeti makes an exit from his house. Juhi takes her home, while Kusum doesn’t appreciate Juhi’s decision. Kusum doesn’t like Preeti much. She wants Preeti to find another shelter. Preeti too wants to live alone, instead burdening Juhi with her responsibility. Preeti finds a job according to her skills. She joins a wedding event management firm, KT’s company Shaadi Mubarak and their friendship begins.