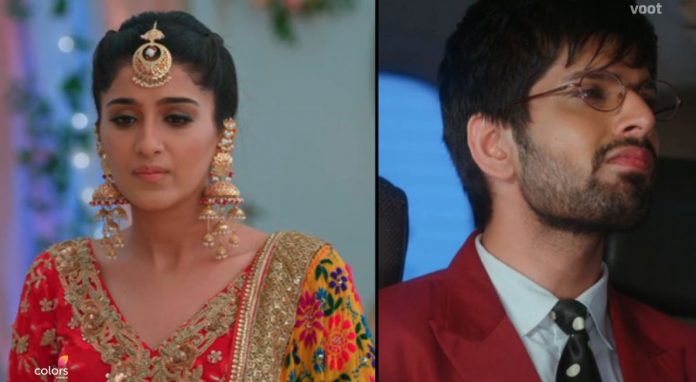 Choti Sardarni Upcoming Vikram suspicious irksome drama 5th September 2020 Meher and Sarabjeet celebrate the festive with their siblings. They are very happy to share the happiness. Sarabjeet gifts the Sandhara gifts to Aditi as well. Meher wants to know what is Vikram planning. Sarabjeet doesn’t care for Vikram’s presence while he decides to make a big announcement. Kulwant asks Sarabjeet about the gift kept separately. She questions him.

Jagga wishes Sarabjeet all the best in his search for Guddi. Sarabjeet misses Guddi. Aditi finds him upset. Vikram hinders her from meeting Sarabjeet. He wants to tell her about Sarabjeet’s sister Guddi when right time comes. He tells her that Sarabjeet got emotional. Aditi asks Sarabjeet the reason for his tears. Sarabjeet tells that he is thinking of her marriage, he got tears thinking of her bidaai. Aditi tells that there is still much time. She rushes for the hospital emergency. Vikram wants to stay back until dinner.

She asks Vikram to stop joking and come with her. Meher tells Sarabjeet that Aditi and Vikram’s relation isn’t a normal one. Sarabjeet tells her that Aditi would be upset because of Vikram’s investigation. Meher tells that she has noticed Aditi and Vikram, who stayed alienated. Aditi asks Vikram not to get back into the function. Vikram tells that he will go to his office. He sends her away. He gets some nails to puncture his car tyre. He wants to begin his investigation at Kulwant’s place.

Sarabjeet tells Kulwant that Vikram will get respect until he stays as Aditi’s fiance. Vikram gets ready with his drama. He asks Jagga to drop him home, since his car tyre suddenly got punctured. Jagga agrees to take Vikram along. Meher finds Vikram in Jagga’s car. She suspects him to be planning something. Jagga asks her not to stress. Meher tells that she will arrange a car for Vikram. Meher shares her suspicion about Vikram with Harleen. Harleen tells her that she has seen Vikram making Sarabjeet’s video. She is much angry. She scolds Meher for inviting Vikram home. Meher clarifies that she didn’t invite Vikram, Sarabjeet got him in by showing great hospitality.

Reviewed Rating for this particular episode Choti Sardarni Upcoming Vikram suspicious irksome drama: 4/5
This rating is solely based on the opinion of the writer. You may post your take on the show in the comment section below.