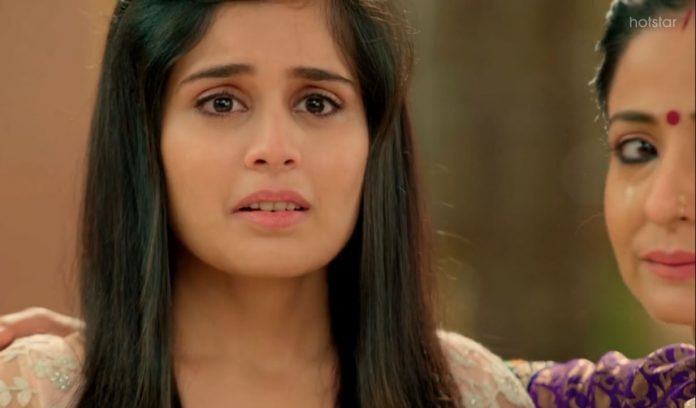 Rishte Pyaar Tellyreviews Update Mishti Abir separation twist coming up 4th September 2020 Star Plus Abir feels Meenakshi has been wrong to insult Vishwamber and Rajshri. Mishti doesn’t want Meenakshi and Abir to have a clash. Abir asks her not to feel guilty, since his issues with Meenakshi are there since his childhood. He tells that Meenakshi has crossed all limits today. She tells that she respects Meenakshi, but she will not let her ruin their relation.

Abir wants to find a new place for them. He tells her that he wants her happiness, he has to find a new house so that they can stay in peace. Vishwamber and Rajshri are much worried. Varsha tells them that Kuhu will support Mishti, they don’t need to worry. Varsha calls Kuhu to know what’s happening there. Kuhu tells her that nothing is going fine, Meenakshi is compelling Abir for remarriage, which made Abir decide to leave the house.

Varsha worriedly asks her to take care of Mishti. She knows Mishti will be blamed for Abir’s decision. Kunal wonders how he could help Abir. He doesn’t want Abir to leave them. Mishti informs Vishwamber that she is okay, Abir has gone to find a new house for them. Vishwamber finds Abir’s decision right. He offers them help. Meenakshi leaves a letter for Abir. She hands it over to Mishti. Mishti checks the letter out of curiosity. She reads the suicide note. Mishti worries goes to find out the truth. She finds Meenakshi going to eat the sleeping pills.

Meenakshi gets hindered by Mishti. She cries out his heart in front of Mishti. Mishti tells that she can’t help her. Meenakshi asks her to leave from Abir’s life and make a love sacrifice. Mishti tells Meenakshi that Abir and she can’t be separated, they are two parts of one heart. Meenakshi asks her to be practical. She adds that when Kunal and Kuhu get children, then Abir and her relation will suffer. She wants Mishti to make a sacrifice of her relation if she wants Abir’s happiness. She reads Abir’s emotional poetry to influence Mishti.

Mishti refuses to leave. Meenakshi blames her for the sorrow. She tells that she will commit suicide if Mishti refuses. She threatens Mishti. She gives her some time. She wants to break down Mishti. Nidhi gets Kanha swing and shows it to Meenakshi. She tells that Abir will be upset to see it, since he can’t become a father. Meenakshi wants to hurt Abir and Mishti’s feelings. She asks Mishti to decide quickly.

Abir gets emotional seeing the Kanha idol. Mishti cries and thinks Abir really wants his own child. Meenakshi wants Mishti to understand Abir’s emotions and leave. She informs the girl’s family that she will soon come with the shagun. Abir is in a big dilemma. He seeks help from Rajshri. He heads to home after getting her advice. Mishti decides to leave from his life.

Reviewed Rating for this particular episode Rishte Pyaar Tellyreviews Update Mishti Abir separation: 4/5
This rating is solely based on the opinion of the writer. You may post your take on the show in the comment section below.