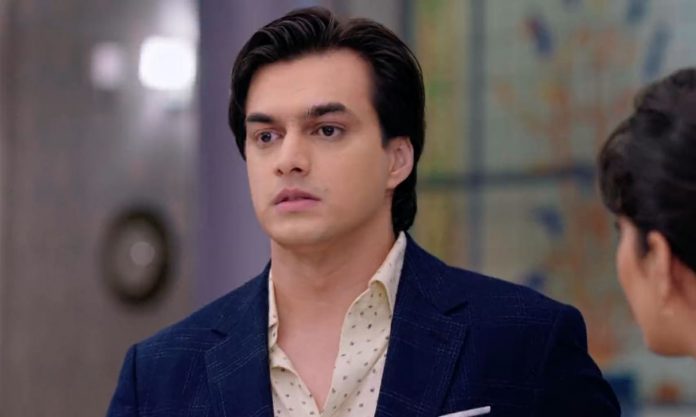 She thinks to keep Chori happy until Sudha comes. Naira and Chori spend time together. Chori goes to get a surprise for her. Naira is much hurt that Kartik didn’t call her or message her to convince. She wanted him to apologize for his mistake. She is ready to forgive him, once he makes an initiative. She awaits him desperately. Devyaani finds her upset. She pacifies Naira and promises to always be with her decision.

She tells that Naira has all the rights to decide, since a woman has to protect her self esteem. She wishes that Kartik realizes his mistake and makes up to Naira. She advises Naira not to spoil her relation by ego, and just focus on making her relation stronger. Naira gets emotional. She confesses that she is missing Kartik a lot. She wishes that Goenkas get the happiness back with Manish’s recovery.

Chori also prays that Naira’s sorrow ends. She wants Kartik and Naira to stay happy. She asks Naira to be positive. Singhanias decide to meet Goenkas and attend the puja. They decide to leave Naira and Chori at home. Kirti wants to talk to Kartik about Manish’s surgery. Goenkas learn that Kartik spoke to the doctor, but is unsure about the surgery. They want to decide about Manish’s treatment.

Kirti storms inside the house and looks for Kartik. She reveals that Kartik has denied to get the surgery done even when he knows the risk. She gets into a bitter fight with Kartik. She accuses him for not taking the right decision for Manish. She asks him if he wants Manish’s condition to get worse.

She fears that Manish will forget everyone if his state gets worse. Kartik tells her that he is doing the best as per his capabilities. She doesn’t think he is putting the best efforts. She tells him that she will take up Manish’s responsibility and get him treated. She wants Manish to undergo the surgery. She tells Kartik that she will decide for her dad. Kartik tells her that Manish is his dad as well.

He realizes his mistake of hurting Naira on her birthday. He feels hurt by Kirti’s words. He gets in Naira’s place and suffers. He tells that he has been wrong in judging Naira, even when he had seen her putting efforts in Manish’s care. He didn’t think of Naira’s sentiments and ruined her birthday. He feels sorry.

He decides to meet Naira and apologize to her. He reaches Singhania house to meet her, but gets obstructed by Chori. He tells her that he has come to apologize to Naira, since he realized his mistake. Chori doesn’t let him enter the house since he has hurt Naira a lot. Kartik fails to reach Naira. He plans a big surprise for Naira to make up for his mistakes. Will Naira forgive him? Keep reading.

Reviewed Rating for this particular episode YRKKH Tellyreviews Upcoming Kartik terrible realization: 4/5
This rating is solely based on the opinion of the writer. You may post your take on the show in the comment section below.