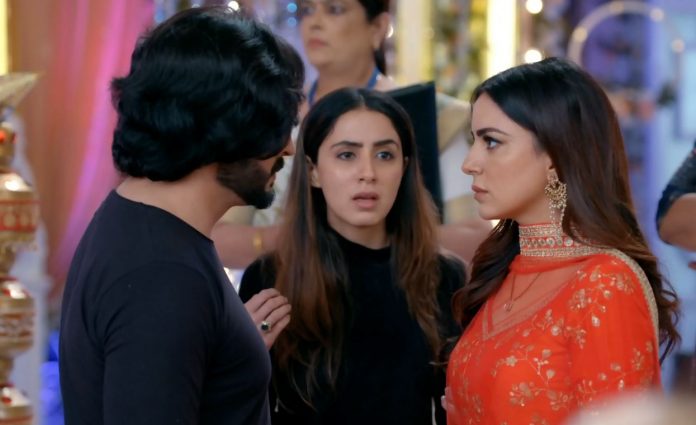 Kundali Bhagya Written Update 7th September 2020 Rishabh doesn’t want Karan to always blame Preeta. Karan tells that Preeta has done magic on him. He is against Preeta. Rishabh tells that he knows everything and he trusts Preeta. Karan doesn’t trust Preeta. Preeta gets angry and tells Karan that he has trust issues that he isn’t able to trust his own brother. She scolds him for blaming Rishabh in such a way. She tells that she isn’t plotting anything. She lets Karan free to think of anything she wants.

She tells him that she has spent a lot of time to win his trust, he never trusted her and will never do. She is sure that he will never believe her, so its better that she believes herself. She wants him to know that none can stop her. Inspector wants Karan to tell them what did he decide. He tells that Preeta has many rights, but he has no such rights. Preeta asks Karan to return her rights by keeping the marriage vows. Preeta tells him that he should support his wife. She exclaims that she wants his support to do a lot for his family.

Karan doesn’t want to support her. The Luthras like his decision. They don’t want to accept Preeta. The NGO ladies want Karan to accept Preeta. They are against the evil and troubling Preeta. They warn Karan. Inspector asks Karan to shut up and not hurt Preeta. Karan asks them not to threaten him. Inspector clears the fact that she can arrest Karan and Luthras on Preeta’s one complaint. She tells that Luthras will be defamed, the news of their domestic violence will become the headlines of the newspapers. She advises them to accept Preeta as the Bahu of the family.

Preeta wants to secure Mahesh. She tells Karan that she has given him a complete year to think, but he has still ignored. She has come to Luthra house to never leave. She gets helpless to follow the law. She apologizes to him for being rude to him. She tells Karan that his family can land into trouble, they can lose their rights.

Karan tells her that he knows her well. He adds that he expected her to ask for divorce and demand a big alimony. He tells the NGO ladies that he knows Preeta’s real face, she wants his money, she will do the same as she did the last time when she had sent the legal notice to ask her share in his property. Preeta tells Karan that she didn’t send any such notice. Karan tells that he will accept Preeta to prove her wrong.

He wants to accept her just to expose her true face. He gives her the identity she wants. He declares her as his wife, Preeta Karan Luthra. Preeta is thankful that he finally gave up. Karan tells her that many truths will come to the core. Inspector wants Luthras to keep Preeta with respect. She tells that she will keep visiting Preeta to ensure her happy stay. Rishabh and Sameer get happy. Sameer goes to inform Shrishti. Mahira breaks down with Karan’s decision. Sherlyn wants to pacify her so that she doesn’t make any mistake in stress.

Kundali Bhagya Written Update 7th September 2020 Moreover, Bani is tensed. She feels sorry for Karan. She tells that Preeta has hurt Rakhi’s heart as well, she has failed in the emotional drama and now she has made a place for herself in the house. Sameer tells that Preeta asked Rakhi to help her, but Rakhi didn’t. Kritika feels Preeta was right, but this time she is wrong. Bani gets a foot sprain. Sameer tells her that Preeta can do the aid to her.

Bani tells that she can never accept Preeta as Karan’s wife. Sameer knows that Preeta’s struggle will not end so soon, she still has to win the hearts of Luthra family members. On the other hand, Shrishti wants a best friend in her house, since Preeta already left. She asks Sarla or Janki to decide if they will befriend her. Janki tells that she is already Shrishti’s friend. She praises Sarla for being so soft-hearted. Sarla is tensed. She wants to know about Preeta. She asks Shrishti to call Luthras and ask about Preeta.

Shrishti calls Sameer on Sarla’s saying. Sameer wants to talk to Shrishti later when Bani calms down. Sarla knows that Luthras are against Preeta. Shrishti tells that Sameer is with them, not all the Luthras are against Preeta. Preeta asks Gayatri, NGO lady to tell the next step. Gayatri tells Preeta that she should stay as Karan’s wife now, Luthras should welcome her, they shouldn’t torture or insult her. She wishes happiness and good luck to Preeta.

Reviewed Rating for this particular episode Kundali Bhagya Written Update 7th September 2020: 5/5
This rating is solely based on the opinion of the writer. You may post your take on the show in the comment section below.