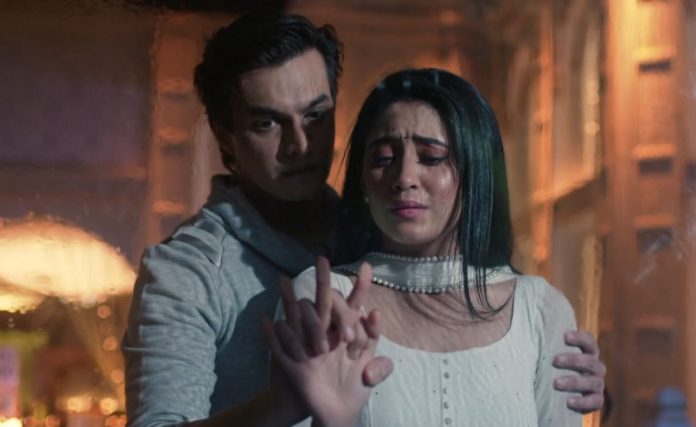 Yeh Rishta Kya Kehlata Hai Upcoming Kaira romance Chori doesn’t give any entry to Kartik even when he pleads. He wants to meet Naira once and apologize to her for his ill behavior. Chori doesn’t want to come into his words, knowing he always hurts Naira. Kartik tries hard to convince her. He is ready to give her anything. Chori doesn’t want any bribe. She tells him that she isn’t greedy, she can’t trust him, its better he goes away.

Kartik finds it impossible to convince her. He thinks to find some other way. He is guilty to hurt Naira. He thinks its actually good he is facing this trouble, since he is really at fault. Kartik goes away. Chori gets relieved that he has left. She doesn’t want Naira to know about him.

Naira takes an appointment from the surgeon to discuss Manish’s case. She doesn’t learn that Kartik had visited her. Chori checks if he really went. Naira suspects her odd behavior. She is upset that Kartik didn’t come to convince her. She checks the door, but doesn’t see him. Chori tries to cover up her act. Naira asks Chori not to open the door for anyone. Kartik reaches Naira’s room through the window.

He gets happy to see the cutout picture. He feels Naira missed him a lot. He gets mistaken that she is approaching a divorce lawyer. He doesn’t want Naira to end their relation in anger. He thinks if Naira wants to divorce him. Chori finds him in Naira’s room. He seeks her help. Chori also wants to bridge their gaps. She sends him to Naira. Kartik and Naira have a moment. He apologizes to her for his mistake.

He misunderstands her decision. He tells her that she can’t decide for their divorce along, since they had suffered a lot in their lives. She clears his misunderstanding. She tells him that she can never divorce him, even if anything happens. He asks her to better beat him than opting for divorce. Naira bashes him with love. She tells him that she will never put themselves in pain.

She wants him to go to Manish and take care of him. He tells her that Manish needs her as well. She is much hurt that he has made her away from Manish. She doesn’t forgive him. Chori asks him not to give up and just keep trying to win her heart. Kartik gets motivated by hearing to Chori’s words. He doesn’t deter and wants to try some other way. He thinks to reach her heart by an earnest apology.

Kirti feels sorry to hurt Kartik’s sentiments. She doesn’t know the result of her argument. Suwarna tells her that Kartik has realized his mistake after Kirti’s statements. She asks Kirti not to speak anything wrong again. She is glad that Kirti’s anger worked for Kartik and Naira’s relation. Goenkas and Singhanias wish Naira to forgive Kartik, after making him repent well so that he doesn’t repeat his mistake. Kartik comes up with an emotional surprise for Naira, and leaves her in tears.

He tells her that he will not go anywhere until she forgives him. He revives their golden memories and confesses love for her. He tells her that even if anger comes between to spoil their terms, nothing can change their love. Kartik and Naira’s romance will be seen in the coming track. Naira forgives Kartik. They spend time in Singhania mansion after having a patch up. Excited for Kaira romance after a long time. Keep reading.

Reviewed Rating for this particular episode Yeh Rishta Kya Kehlata Hai Upcoming Kaira romance: 5/5
This rating is solely based on the opinion of the writer. You may post your take on the show in the comment section below.