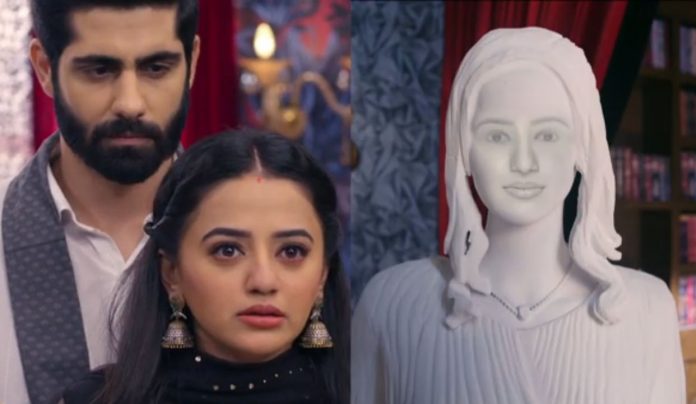 Ishq Mein Marjawa Tellyreviews Upcoming Spoiler Riddhima doesn’t want to get out of Vansh’s mansion before getting any evidence to fulfill Kabir’s mission. She wants to help Kabir in getting Vansh arrested. She looks for the proofs again. She reaches the garden and digs the same place again. She finds Ragini’s diary there. She reads it. She thinks Vansh has killed Ragini. She wants to find out what happened with Ragini. She isn’t able to believe Dadi. She thinks to send Ragini’s diary as a proof to Kabir.

She also writes a note asking Kabir to save her life from danger. He suspects that Vansh is about to kill her, since he has already made her statue. Riddhima’s suspicion gets high when she overhears Aryan and Chanchal talking about the statue. Vansh tells Dadi and Anupriya that he has planned an outing for them. He tells Anupriya that Riddhima will get a huge shock and then never try to spy around. He wants to bring Riddhima out of her spying mode. He feels she deserves this shock.

Soon, Vansh receives the statue at his house. He sends it to his room. He stops Riddhima from going with the family. He tells that they aren’t going, they will be spending time together. He acts lovely dovey again and makes her fall in dilemma. Riddhima gets scared to share the room with him, after Aryan warns her about Vansh’s madness. Vansh unveils the statue to Riddhima, making her shell shocked. He asks her about the beautiful statue.

Riddhima is left terrified. She doesn’t want to lose her life. She recalls sending the parcel for Kabir with the diary and note. She wants Kabir to act fast and come to VR mansion to save her life. Riddhima lies to Vansh that she is sending a gift for her best friend Sejal. Dadi calls Sejal lucky to get a friend like Riddhima. Vansh counts Riddhima’s lies. He knows she is adding up more troubles. Vansh stops her to check the parcel. He doesn’t check it, knowing she isn’t sending it to Sejal but someone else. He knows she is cheating him and wants to know the mastermind of the entire plot.

He tells Angre that he is making Riddhima feel victorious so that she makes a mistake and gets her partner caught. He wants to find out the secret enemy, who planted Riddhima in his life. Vansh decides to not forgive her for the cheat. Will Kabir come in time to save Riddhima’s life? Is Vansh doing everything to prove his innocence in Ragini’s case? Keep reading.

Reviewed Rating for this particular episode Ishq Mein Marjawa Tellyreviews Upcoming Spoiler: 4/5
This rating is solely based on the opinion of the writer. You may post your take on the show in the comment section below.