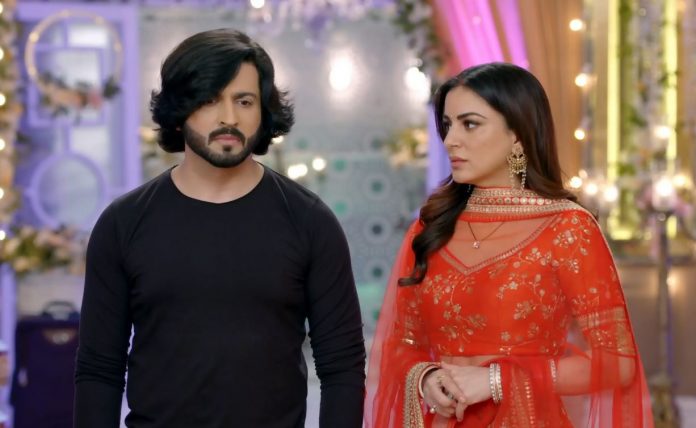 Kundali Bhagya Tellyreviews Karan Preeta Grah Pravesh Preeta gets a place in Luthra mansion. Rishabh knows that Preeta has won, but there will be a storm in the family. Mahira wants to provoke Karan so much that he doesn’t care for the police and throws out Preeta from the house.

Inspector suggests the Luthras to welcome Preeta in the house. She asks them to conduct Preeta’s Grah Pravesh. Rishabh agrees with the idea. He tells that Sherlyn’s Grah Pravesh also happened at the time of his marriage. Karan tells the police that Preeta isn’t a helpless woman. Inspector warns Karan against his bitterness. She scolds Karan and also the Luthras. Mahira loses her cool.

The NGO ladies want to assure that Preeta’s Grah pravesh goes well since she was getting ousted. Inspector asks Sherlyn to make Karan’s room ready so that Preeta gets at ease. Mahira gets angry at the inspector. Inspector tells Karan that she is his fan, but she is a police officer as well, she will not let injustice happen with Preeta. She wants him not to ruin his image by his silly ways.

On the contrary, Preeta is thankful to Sarla who encouraged her to fight for her rights and esteem. She promises herself to always make Sarla proud. She wants Sarla to always support her. Sarla misses Preeta. She stays worried for her daughter. Sarla cries her heart out. She wonders if she has done wrong to send Preeta to Luthras. Shrishti tells her that she has done the right thing to give courage to Preeta to fight the wrong doers.

She wants Sarla to just believe Preeta. She is sure that Preeta will never disappoint them. Sarla knows that Preeta will fix Karan’s life as well, she has saved him from Mahira. Inspector asks Rakhi and Kareena to prepare the Bahu’s Grah Pravesh. Rakhi feels forced to welcome Preeta. She loved and trusted Preeta a lot. She feels Preeta has broken her trust. She tells Kareena that Preeta has ruined the family respect and name.

Also, Kareena asks her not to fall into Preeta’s emotional blackmail. Rakhi promises her. They get helpless to welcome Preeta to show to the police. Sherlyn and Mahira try to decorate Karan’s room to show the police constable. Mahira cries for Karan and lies on the bed. Constable lady scolds Mahira for sleeping on the bed instead decorating it. Mahira gets hurt by the thorn. She thinks to lay the thorns on the bed to hurt Preeta.

She gets caught by the constable while laying the thorns. Constable threatens of arresting her. Sameer learns that Preeta’s Grah pravesh is happening. Bani scolds the servant. She doesn’t have any interest in the nonsense. Sameer is sure that Preeta will make everything fine once she stays with the family. Moreover, Karan tells Rishabh that Preeta is getting the rituals done as if its their normal marriage. He wants them to see her true face.

Rishabh tells Karan that he doesn’t trust him, he trusts Preeta more. He explains that the police is supporting Preeta since she is right. He is proud of Karan to carry ahead the rituals. Sherlyn asks Mahira not to fight with the constable. Mahira gets helpless to remove the thorns. Constable teaches a lesson to Mahira and Sherlyn. Preeta and Karan’s Grah Pravesh becomes a challenge when he denies to stand with her. Inspector threatens of arresting Karan to compel him.

Reviewed Rating for this particular episode Kundali Bhagya Tellyreviews Karan Preeta Grah Pravesh: 4/5
This rating is solely based on the opinion of the writer. You may post your take on the show in the comment section below.