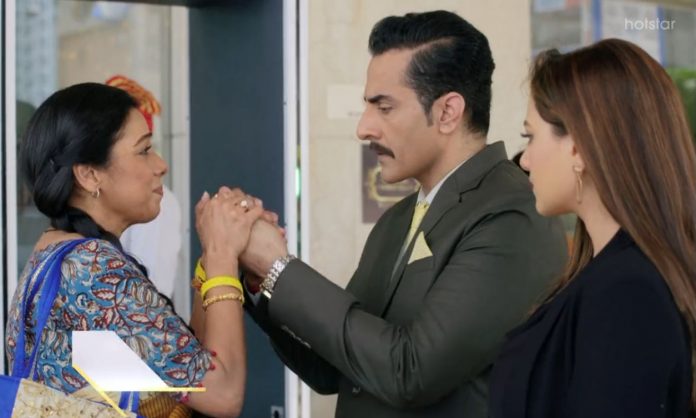 Anupama Update Upcoming Vanraj love drama Rakhi entry Anirudh and Vanraj’s bitter argument and the fight sequence gets cropped. The scene shown in the last day’s precap isn’t shown in the episode. Taking the story ahead, the scene begins with Samar and Nandini’s funny talks. Nandini is not happy that he was following her to the market on his cycle. She had to surpass him and reach first, being on her scooter. Samar wants to spend time with her.

He develops a liking for her, even when he knows that she is three years elder to him. Anirudh walks off from Vanraj’s house. He comes across Samar and Nandini, who are in a romantic pose after she slips down. Anirudh showers his taunts on Nandini’s character. He tells that she is just like Kavya, who is after Vanraj these days. He doesn’t want to demean Kavya, but wants her away from Vanraj. Anirudh is much angered that Anupama didn’t believe him.

He feels Vanraj is lucky to get a wife who blindly trusts him. He wishes Kavya could have become a good wife. Nandini doesn’t accept his nonsense. She tells Samar that Kavya is divorcing Anirudh because of his bad ways. Anirudh can’t explain Kavya’s affair to them. Samar finds Nandini disheartened. She tells that Anirudh has a small mindset, Kavya was in love with Anirudh, but later they started to have differences.

She feels men can’t see their wives working and getting independent, their male ego ruins their relationship. She doesn’t like the society’s take towards such couples. She doesn’t want men to degrade their wives. Samar tells her that everyone isn’t the same, all the men don’t have the same mentality. She expresses her disapproval towards the institution of marriage. She hasn’t seen many marriages working. Even her parents are separated. She doesn’t want to get married. Samar welcomes her to the singles club and cheers her up.

On the other side, Vanraj expects a storm in the house. He didn’t wish Anirudh to come to his house and try to create a stir. Kavya apologizes to Vanraj and his family on her husband’s behalf. Baa criticizes Kavya, while Anupama offers total support to Kavya. Anupama understands that Anirudh is doubting Kavya for no reason. She shows her immense faith on both Vanraj and Kavya.

Kavya doesn’t feel guilty this time, since she now wants to snatch Vanraj from her. Anupama opens the doors of her heart and house for Kavya. She asks Kavya to walk in anytime if she needs help. She is ready to give a place to Kavya in her family. Kavya gets assured and relieved. She thanks Anupama. Anupama wants Vanraj to drop Kavya home. Vanraj wants to stay back in the house and try to neutralize the situation. Kavya understands him and manages alone. Anupama showcases her values. Vanraj is happy that she blindly trusts him.

He is taking advantage of her trust. He informs Kavya that he couldn’t drop her since he had to know what Anupama is thinking. He tells that Anupama is great to believe him despite hearing the entire truth from Anirudh. He thinks none could have shown such a big heart like Anupama. He makes a plan to spend some good time with Anupama, just to cover up his mistake. Kavya warns him to not break her trust. She tells him that his one mistake will ruin their relationship. She loves him and can’t lose him. Vanraj promises to be loyal to her.

Baa and Anupama are trying to get over the matter. They don’t want the family to lose happiness. Baa tells that Anupama should have not entertained Kavya. Anupama tells that Kavya isn’t at fault. Baa wants her family to stay happy and peaceful. Anupama wants to pray for Kavya as well. Baa asks her to protect her marriage. Anupama tells that she has no fears since she has total faith on Vanraj. Baa is glad to see her faith.

Anupama tells that she can never doubt Vanraj’s love. Vanraj begins to fool Anupama by his love drama. Rakhi visits Shah family to end their bitterness. She wants to make a new start. She apologizes to Vanraj. She expects him to apologize as well. Paritosh and Kinjal stay tensed about their parents’ meet.

Reviewed Rating for this particular episode Anupama Update Upcoming Vanraj love drama Rakhi entry: 5/5 Interesting
This rating is solely based on the opinion of the writer. You may post your take on the show in the comment section below.