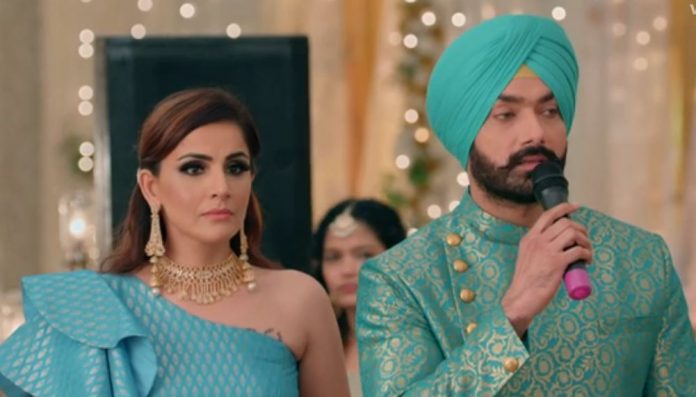 Choti Sardarni Sarabjeet Aditi emotional union 14th September 2020 Vikram doesn’t get any answer from his parents. Surya calls Vikram’s senior to get him off the case. He doesn’t want Vikram to find out his past. He convinces the officer to transfer Vikram to another city for a new case. Aditi feels happy that Sarabjeet has accepted her, even when he doesn’t know her truth. She praises Sarabjeet for being such a good-hearted man.

Sarabjeet welcomes Vikram and his family. He wants everything to be perfect. Kulwant gets to meet Vikram’s family. She wants Vikram to marry Aditi and leave the city. Vikram learns that Manav’s case is still going on. Kulwant tells him that Manav looks like him. She asks him to find Manav and punish him. Vikram doubts Kulwant. Vikram gets glad to meet Aditi. He compliments her beauty. Harleen announces a ritual.

She wants to donate the things so that Aditi gets many blessings. She asks Aditi to touch the things kept near her grandpa’s picture. Sarabjeet asks Aditi to hurry with the charity rituals so that they can proceed with the engagement. Aditi recalls her grandpa’s words on seeing his picture. She gets much upset. She recalls the past. She suddenly starts feeling unwell, much to Sarabjeet’s shock. Sarabjeet and Vikram run to Aditi to help her.

Aditi’s condition worries everyone. Vikram finds Aditi tensed. He knows the hidden past. Param goes to get Aditi’s inhaler when she gets an asthma attack. Vikram arranges the inhaler for her. Aditi gets fine. Meher sees the picture. She learns that Sarabjeet’s stepsister Guddi has come home. She tries to find Guddi. She thinks who is Aditi and why is she hiding from them. She enquires about the photo. She gets no answers. She wants to inform Sarabjeet and Harleen that Guddi is in their family. She shows them the photo of Guddi.

He tells that he had the same photo in his locker. She tells him that she found the photo in their house. He realizes that the photo is Guddi’s copy. He goes to ask some guests about Guddi. Vikram finds Sarabjeet looking for Guddi. Meher tells Sarabjeet that she is sure that Guddi will come to them to complete their dad’s incomplete poetry. She suggests him to read the poem to find Guddi. Sarabjeet and Harleen make an announcement to find Guddi. They tell the guests that they have to find Guddi, their sister. They read their dad’s poem.

He encourages her to get her place and rights in the family. He asks her not to hide the truth. He reminds that she was longing for the family since the last twenty years. He knows that its the right time that she discloses the truth to Sarabjeet. Aditi gets too emotional. Aditi leaves the decision on her. The pandit tells Sarabjeet that they should get the engagement ceremony done soon. Sarabjeet asks him to start the rituals.

He leaves the hope to get Guddi. He wants Aditi’s engagement to happen in the right moment. He doesn’t want Aditi’s engagement to spoil. Aditi continues the poem and reveals that she is Guddi. This comes as a big surprise for Sarabjeet, who had already accepted her as his sister. Sarabjeet and Harleen unite with Aditi. They hug Aditi and get too happy. Sarabjeet is grateful to Meher for her idea, that worked and brought Aditi to them.

Reviewed Rating for this particular episode Choti Sardarni Sarabjeet Aditi emotional union 14th Sept: 5/5
This rating is solely based on the opinion of the writer. You may post your take on the show in the comment section below.