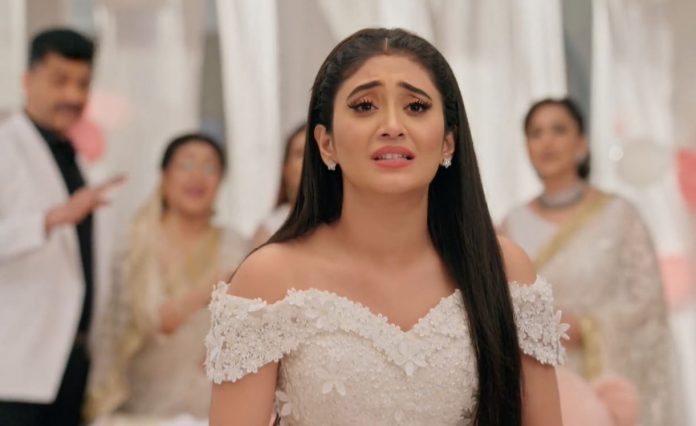 Yeh Rishta Naira loses Kartik Kirti Naksh distant 16th Sept Aditya plants a seed of doubt in Naksh’s mind. He is taking revenge on Naksh and Kirti. He sounds so confident and suggests that they will get the paternity test done. He tells that Krish is his son, he can prove himself true by getting the tests done. He tells Naksh that he isn’t scared, since he is much sure that Krish is his son. Kirti worries for Naksh’s reaction.

She doesn’t know what to do. Naira takes a step and slaps Aditya to stop his nonsense. She knows his words are affecting Naksh’s mind. Kartik throws out Aditya from the house. Aditya happily goes after ruining Naksh and Kirti’s beautiful relation. He has used Kirti and his pictures of the past. He is manipulating everything to break her marriage. He can’t see Kirti living happy with the family. Kartik threatens Aditya and sends him out.

Aditya is sure that Naksh can never trust Kirti like the same way. Kartik apologizes to Naksh. Naira and Kartik ask Naksh not to doubt Kirti, else their love and relation will end. The family tries hard to explain Naksh that he should not spoil his relation with Kirti. Kartik tells that he regrets a lot that he had doubted Naira’s character. He asks Naksh not to repeat his mistake. He tells that love and trust should go hand in hand.

Naksh worries for Naira’s state. He tells that he will take Kirti home by forgetting everything. He just cares for his sister’s happiness. Kirti gets mistaken that Naksh has forgiven her. Naksh gets praised by Goenkas for his maturity and understanding. Kartik feels Naksh truly loves Kirti. Naira faints down, which worries Kartik. He calls a doctor for her. Kartik receives the lab reports and learns that Naira is really pregnant.

He congratulates her. He tells Naira that she is pregnant, her intuition was right. They both get happy that they are becoming parents again. The family wishes them for the good fortune. He wants to be with Naira during her pregnancy, since he has missed the caring moments when Kairav was born. Dadi wishes that they both just stay happy. Naksh tells Kirti that he got her home since he can’t see Naira and her family upset. He tells that she had lied to him, he also lied for the sake of family. He can’t forgive her.

He tells that its not easy for him to forgive her. Kirti breaks down. She cries that she is losing Naksh. Meanwhile, Kartik and Naira decide to inform Kairav that he is going to become an elder brother. Kartik’s picture falls down from the family tree. A bad omen occurs, but Kartik and Naira miss to observe it. Dadi is happy that Kirti’s marriage got saved. She prays for Kartik and Naira’s coming child. She wishes Manish recovers soon.

Gayu finds Dadi excited. She feels Dadi never considered her baby so special. She isn’t jealous of Naira. She wishes Naira stays happy. She promises to look after Naira. Naira senses something wrong when she doesn’t find Kartik. She meets him and hugs him. She shares her fears. He clicks a picture of her fake baby bump. He gifts her the little anklet. They are very happy together. She gets an upsetting nightmare, that Kartik is leaving her and going away. She gets terrified. She doesn’t find Kartik anywhere. She falls down the stairs and fears of getting the baby harmed.

Review: Naksh should trust Kirti after all their relationship is of years. He shouldn’t come in Aditya’s words, knowing the kind of person he is. Also, Naira always gets illusions that scare her. She senses the bad omen that she will be getting away from Kartik. Naira’s nightmare comes true. The track is repetitive, since such incident has shown before in the story before their separation.

Reviewed Rating for this particular episode Yeh Rishta Naira loses Kartik Kirti Naksh distant 16th Sept: 2/5
This rating is solely based on the opinion of the writer. You may post your take on the show in the comment section below.