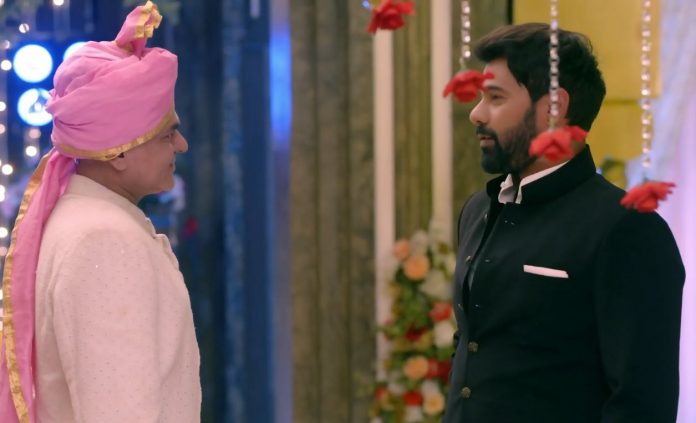 Kumkum Bhagya 18th September Abhi supports Ranbir Rhea gets attacked by Madan. She tells him that he is catching a wrong girl. He doesn’t listen to her. Shahana is relieved after Sarita tells her about the bride change. Dushyant asks Vikram to learn from him, how to control women in the family. Aaliya doubts Shahana on seeing her. Madan kidnaps Rhea as well. He takes her inside the food trolley. He wants Aaliya to decide about the girls.

Prachi gets worried to face Maya’s mum. She realizes that Maya’s mum didn’t see Maya till now. Maya’s mum insists her to lift the veil. Prachi thinks she will be caught. Madan takes a leave. Aaliya misunderstands that Maya is kidnapped seeing Madan leaving. She doesn’t see Rhea kidnapped. Madan thinks he will get much money.

Meanwhile, Abhi arrives for the wedding ceremony. Madan stops him from seeing the sacks. Abhi thinks how is the trolley going on its own. Madan tells him that he will manage, he is taking the laundry sacks. Abhi questions him. He asks him to open the sacks and show him. Madam asks him to mind his own mind. Abhi tells that its his friend’s hotel, he wants to check the sack contents. Aaliya stops Abhi from seeing Maya.

She sends Madan away. Abhi tells her that Madan is a misbehaving man. She tells that she also scolded Madan and remembers his name. She wants him to come for the function. Abhi gets misled. Maya’s mum gets called by Dushyant. Prachi thinks where did Maya go. Sarita tells that she will bring Maya. Prachi tells Sarita that Maya is missing, they should keep an eye on Rahul as well. Aryan and Shahana look after Rahul. Shahana tells Aryan that maybe Rahul is acting. She checks Rahul and finds him really unconscious.

Furthermore, Ranbir gets his phone charged. Aryan calls Ranbir to tell about Rahul. Ranbir can’t talk to him in front of Chobey. Chobey snatches Ranbir’s phone. He asks Ranbir to take the phone after the wedding. Ranbir waits for Abhi. Aaliya tells Abhi that Dushyant kept everyone at gun point to get the mandap fixed. She tells about Pallavi and Dida’s stormy fight. Vikram gets happy to see Abhi.

Abhi jokes on his new business. Vikram tells that they have to stop the marriage. Aaliya wants to tell Abhi the truth that Rhea is getting married. She can’t tell him anything. She goes to talk to Dushyant. She tells him that Abhi has arrived to stop the marriage. He asks the reason for her favor. She tells that she doesn’t like Prachi, its better Ranbir marries Maya. She lies that she wants Ranbir and Maya to get married. He goes to meet Abhi. She gets Madan’s call and learns that the bride is kidnapped.

Moreover, Dushyant meets Abhi and thanks him for ending the wait. He tells that he has his own ways to convince people. He asks his goon to give the gun to Chobey. Abhi runs to meet Ranbir. He hugs Ranbir and tells that he will take care of everything now. Abhi asks Ranbir when did Sarita change the side. Ranbir wants to tell him about Prachi. Prachi gets hopeful seeing Abhi that everything will be fine. Sarita wishes Abhi doesn’t stop the marriage.

Madan tells Aaliya that he has kidnapped two girls. She gets mistaken that he has kidnapped Prachi. She is glad that he kidnapped Prachi. She doesn’t think that he kidnapped Rhea. He asks for double payment. She agrees to pay him. She asks him to kill the second girl. He agrees to do the work. She feels sorry to hurt Prachi. Pragya waits for Prachi at home. She calls Sarita to find out. She worries for her daughter. Abhi requests Dushyant to stop the marriage. He tells that his feelings for Maya’s happiness is right, but he should think for Ranbir as well.

Chobey calls it a good joke. Consequently, Dushyant threatens Abhi. Prachi asks Ranbir if Abhi will stop the marriage. Ranbir tells that he had no time to tell Abhi about her. She wishes the marriage stops. Dushyant tells that the marriage will not stop at any cost. He asks Abhi to tie the Gathbandhan and accept Maya in the family. Abhi tells that he likes the idea, everything is in his hands. Dushyant gets glad.

Reviewed Rating for this particular episode Kumkum Bhagya 18th September Abhi supports Ranbir: 3/5
This rating is solely based on the opinion of the writer. You may post your take on the show in the comment section below.