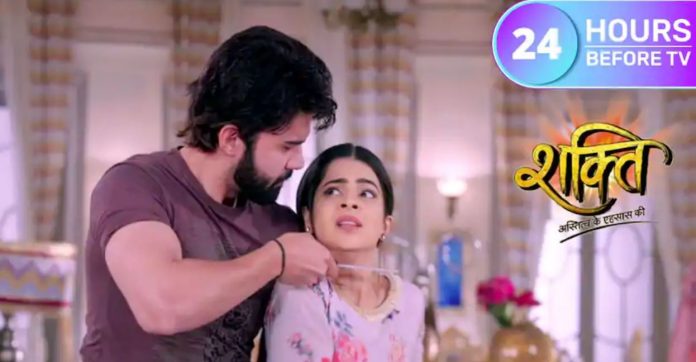 Shakti 18th September Update Virat feels for Heer Soham takes Heer hostage shockingly. He gets her at the knifepoint and tells his evil plans to the family. Preeto and Harak try hard to explain him that he is wrong. They want to stop him. Virat makes an entry there and points the gun at Soham. Virat saves Heer from Soham. Heer tells that they were playing a prank. Preeto scolds her.

Virat indirectly tells Soham that he doesn’t trust his intentions and will come there often holding his gun. Heer tells that she trusts her brothers more than anybody else. Virat brings them home for his mehendi. Jharna asks Heer to apply mehendi to her hands, being Virat’s best friend.

Heer readily agrees and applies mehendi to her hand. Virat gets sad and thinks if Heer wasn’t a kinnar then he would have been his wife, but it is not possible now. He gets up to fix the LED lights strings, and gets electrocuted while looking at Heer. Everyone gets shocked seeing him electrocuted. Heer climbs up on the stairs and pulls the wire on top of the wall, so that Virat gets saved. Virat falls down on the floor.

Heer also faints and falls down on him. Everyone gets shocked. Preeto and Rohan make Heer gain consciousness. She calls Virat’s name. Parmeet massages Virat’s feet with Mustard oil and makes him gain consciousness. Virat imagines proposing Heer and thinks what did he see and when did he propose her, when he is marrying Jharna. They look at each other. Virat realizes his real feelings for Heer.

Reviewed Rating for this particular episode Shakti 18th September Update Virat feels for Heer: 3/5
This rating is solely based on the opinion of the writer. You may post your take on the show in the comment section below.